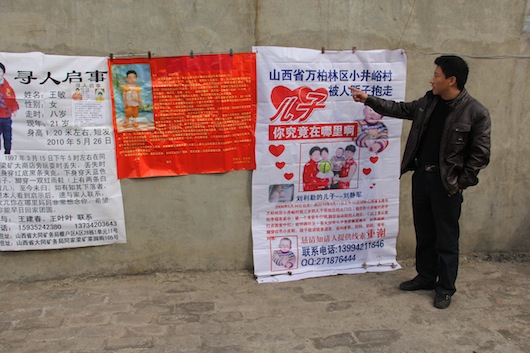 Via Beijing Kids, a screenshot of Charlie Custer’s documentary about child abduction

According to Shanghai Daily, “Eight people were sentenced to up to seven years behind bars in east China’s Zhejiang Province for stealing a baby boy and selling him 10 times within 15 months, the Youth Times reported yesterday.”

Gan and his wife visited the baby’s mother in August 2010 on the pretense of doing business with her. Gan’s wife grabbed the 14-month-old baby forcibly and left. The mother followed and was also abducted. The woman and her son were sold by the human traffickers.

While the last buyers — a couple who couldn’t have children — paid 60,000 yuan for the baby, the mother was purchased for 5,000 yuan in Yunnan province.

The woman is presumably now free, since we know who bought her last. The baby was found after a 15-month investigation, and has been reunited with his father.

For related information, check out the documentary by Charlie Custer of China Geeks, currently under production, called Living with Dead Hearts.

Unrelated, People’s Daily reprinted the above Shanghai Daily story with audio of a computer — a female voice, if you care to know — reading the article. It was strange yet mesmerizing. As if we needed further evidence that People’s Daily is run by robots.