Since we had a pop at the laughably insane Hu Xijin last week, this week’s propaganda piñata will be Shan Renping. Now, Shan is by no means as high profile as Hu Xijin, but he makes up for it by being more hateful and intellectually repulsive. Unfortunately, Shan is a rather difficult party proselytizer to find, much in line with the traditional problem propagandists face (i.e. hiding so that people don’t beat them to death with sticks). So in lieu of a picture, I have provided a dramatization of what he looks like: 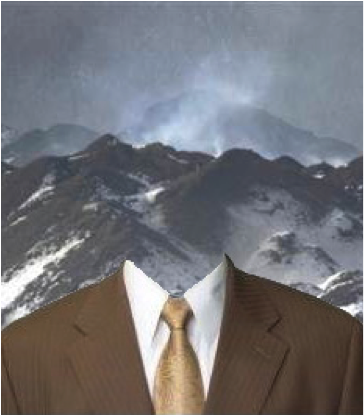 Mostly, this editorial is about how Shan longs for a forceful and strict party, one that doesn’t put up with any namby-pamby rights or criticism. I’m sure he experiences long dark nights where he imagines Hu Jintao (possibly and formerly Bo Xilai) bursting into his bedroom with a balaclava on and forcing him up against the wall face first, while he weakly shouts, “Yes, yes! Make me see the diplomatic imperatives of China’s sovereignty in the South China Sea issue, you sexy development-happy love juice-monster!”

For those of you not paying attention, that is the party’s official stance on Bo Xilai: “We are awesome.” And they decided to give themselves a nice big pat on the back with editorials like those entitled: “Rule of law, purity of Party highlighted in handling Bo’s case” and “Bo investigation warns officials of power abuse.” Does this strike anyone else as sad?

This piece concerns Bo Xilai, a name this cock-bite (Shan) didn’t mention until April 14. The article briefly states that the filthy, filthy Western media (in Japan, Thailand, South Korea, etc.) invented the idea of political infighting and how China needs a firm hand to control it.

The editorial goes on to state that Bo’s arrest shows that “no one who violates the rules or the law is immune to investigation and punishment, nor could they be protected.” You know, unless they want to hide out in the upper echelons of the Communist Party and make millions of dollars. Because Bo did that for quite some time. He only violated “the law” when the Party decided they needed to cut his wings, pluck him and, soon, fry him.

In fact, as far as I know, Bo has not been convicted of anything. Hell, in the Xinhua release, as pointed out here, he was only being investigated for “disciplinary violations,” which is an internal matter. So why have the folks at every newspaper in the country made up their mind that he is guilty? Guilty of what, exactly? Shan, if you find out what he did, give me a buzz. Frankly, we would all like to know.

Unlike Hu Xijin’s tendency to sound like a Bond villain, Shan is very much more in line with propaganda posters, making his editorials much less like the normal threats and more like forced reeducation.

Here are some of my favorite from Comrade Shan this week: 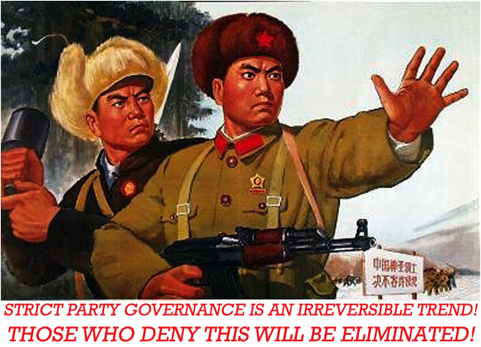 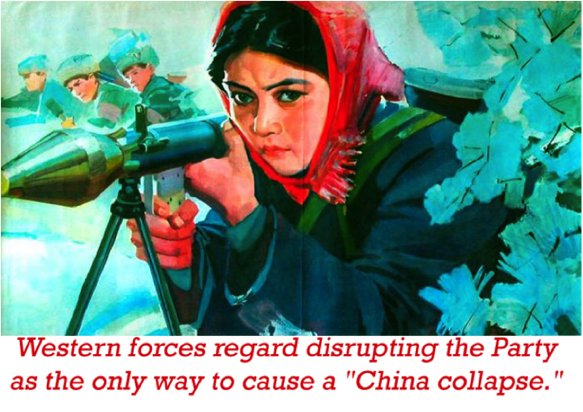 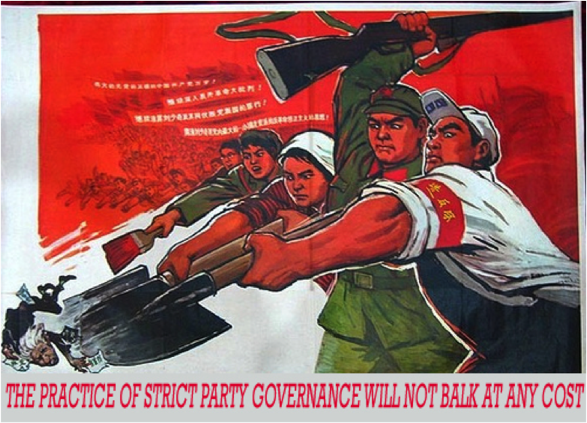 It is indeed forced reeducation because expressing the opposite of Shan’s opinion publicly is tantamount to suicide. How fortunate it must be to actually have the one and only permitted opinion, not to be burdened with thought.

His editorial is about how the West trumped up this charge of political infighting, a charge he insists even more vociferously in last week’s bit.

You see, Shan Renping is a bit—

Actually, let’s get this right for once. He hates the West. Hates. Absolutely, positively hates. He tries to use passive-aggressive language, but there is real, palpable hate there.

If anyone spoke about the “East” the way he speaks about the “West,” they would be branded an ignorant warmongering racist and asked to leave the room. But in China, they get a job with the Global Times.

Just like the theme last week was rumors, rumor mills and how best the Chinese government can choke the life, happiness and individuality out of 1/6th of the people on planet Earth, this week it’s all about officials. Despite those mentioned above, there were a few puff pieces done to pay lip service to how the CPC plans to deal with corrupt officials.

Here’s what the first few lessons are likely to be like: 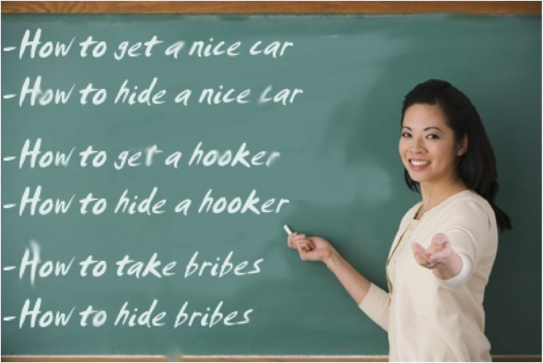 And then, of course, there are the rules of the classroom: 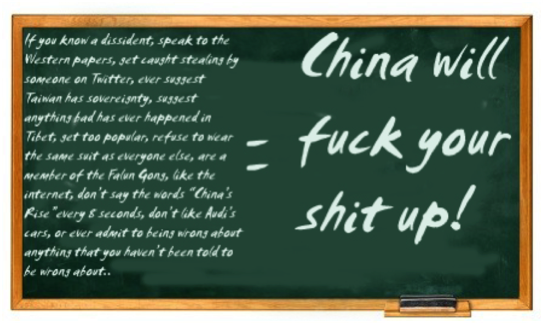 Then there is the reasoning that Tibet has always been part of China: 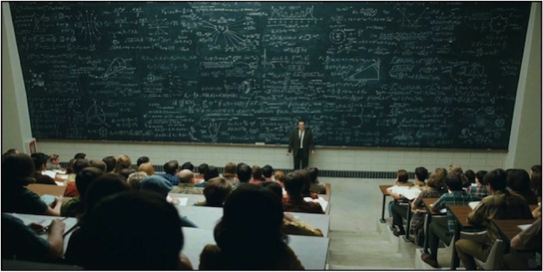 And then there is the most important rule in all of Chinese politics: 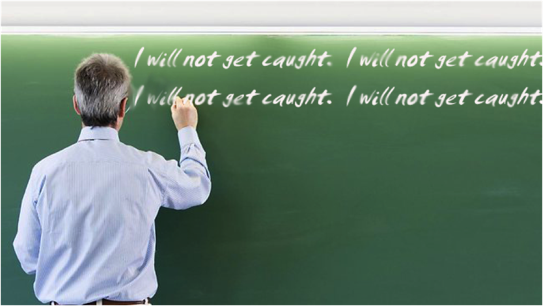 Aaaaaaaaaaannnnnnd back to the Global Times.

Indeed, the population of India did not have a mass hallucination causing them to see missiles; rather, the editorial refers to India having a real, actual missile.

Not just any missile, an Agni-V, a missile with nuclear capabilities that can reach Beijing. That’s right, the “China-killer,” a missile that can destroy abstract proper nouns.

This is the missile’s projected strike range. 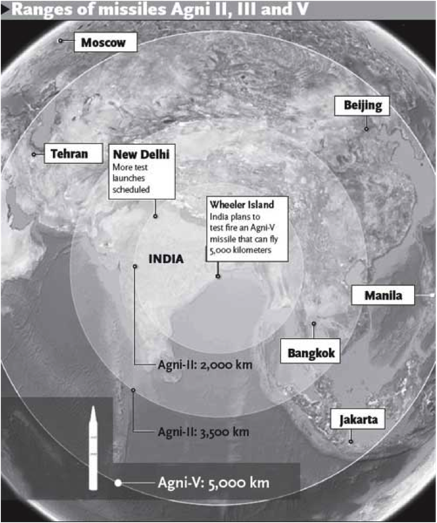 I have scoured the newspapers of Bangkok, Manila, Jakarta and Tehran. They seem not to give a fuck.

But China… China gives a fuck. By having this missile, this editorial states and implies that India has done the following:

Acted arrogant: “Even if it has missiles that could reach most parts of China, that does not mean it will gain anything from being arrogant”

Overestimated its own strength: “India should not overestimate its strength.”

But mostly, this article is just a little reminder to India that China could whoop its ass:

“For the foreseeable future, India would stand no chance in an overall arms race with China.”

“India should be clear that China’s nuclear power is stronger and more reliable.”

“If it equates long range strategic missiles with deterrence of China, and stirs up further hostility, it could be sorely mistaken.”

“China does not spend much time guarding against India, while India focuses a lot of attention on China.”

“China understands the Indian desire to catch up with China.”

To be fair, this missile has been dubbed the “China-killer,” and a great many editorials around the world have mentioned its impact on international relations.

But nobody does mindless passive-aggressive threats like China’s official newspapers. It’s a thing of beauty.

4 Responses to “To Serve People: “Ethics” Training, India’s Missile, And Shan Renping, Please Take Your Place In The Pillory”