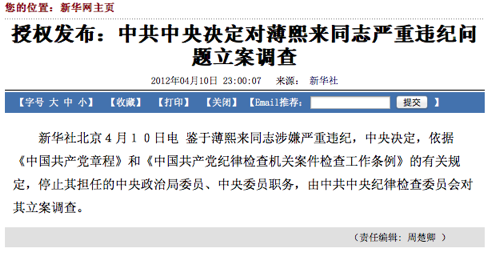 It’s been about 15 hours since Xinhua released news of Bo Xilai’s ouster from his Party posts — released at just the time when no domestic media would be able to turn it around until the next morning, we should note (luckily, BJC keeps late hours). We’ve given the original Xinhua release another look, and two things stand out:

1. Bo Xilai is accused of “违纪” (wéijì), not “违法” (wéifǎ) — “disciplinary violations” instead of violations of law. It’s an important distinction: should he have violated the law — as his wife and aide are accused of — his case would be sent to China’s judicial system. Yes, the judiciary in China is filled with Party members, and the judges ultimately answer to the Party, but there’s a significant difference between a case handled in that arena and a case handled internally, as Bo’s is, by the Party’s own investigative committee.

2. The sixth and seventh words of Xinhua’s release are “同志” (tóngzhì) — comrade. Bo is still one of the Party’s own. Should the investigative committee turn up real dirt, however — something that links Bo to the Neil Heywood death — then it’s safe to say the “comrade” will be dropped from Bo’s name in all further communique. That’s how it is in the close-knit, closed-door, cartel-like Chinese Communist Party: you’re always on the same team until you think you’re above everyone else; then you’re no longer a comrade, but a criminal.