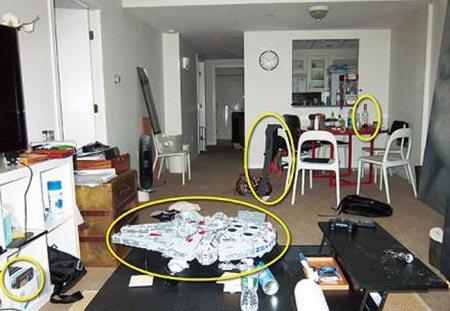 Could this be Bo Guagua’s apartment? Via Want China Times.

Just got back from Nanjing, and here are links.

If you’re ever interviewed on CCTV, be sure to say what the reporter tells you to say, otherwise you might not make the cut. “I know I know. Chinese state media lacking journalistic integrity…truly breaking news. Last year a leaked uncut video showed a farmer being told what to say on camera by a reporter, and CCTV has had plenty of its own fake interviews exposed.” [Sinostand]

We could use more China Hush. “Amongst the most common multinational companies, perhaps only KFC under Yum! Brands would have a hard time leaving Chinese market – KFC’s revenue in China is 49.8% of its total, almost half of its share.” [China Hush]

Gu Kailai is now Brigid O’Shaughnessy. “Gu Kailai, 53, a lawyer who is married to Bo Xilai, one of China’s most powerful men until his recent purge from the party, was described as ‘beautiful’ and seemed to ‘bewitch’ men and gain their loyalty almost immediately.’” [The Telegraph]

Here’s to “rule of law.” “More than 4,000 people were jailed during an aggressive anti-crime campaign that Bo launched in late 2007. While Bo insisted that he was cracking down on gangsters and lawlessness, critics say he led a brutal effort designed to punish rivals and squeeze money from local businesses.” [Washington Post]

I wonder if that “one person with knowledge of the order” is TAR Nation. “Editors at Global Times, a popular newspaper that has Chinese and English editions, have been ordered to run commentaries or editorials that separate criticism of Mr. Bo from the welfare-oriented economic policies he championed in Chongqing, perhaps because party leaders want to take credit for similar policies in the future. The English edition is also supposed to criticize Western news coverage that has emphasized splits within the party, one person with knowledge of the order said.” [NY Times]

Boxun hacked. “Boxun’s original webhost, Name.com, told the Associated Press news agency that the hack was one of the biggest in the company’s history.” [BBC]

I feel sorry in advance for tourists of Taroko Gorge. I say this as someone who was stuck in traffic on the mountain’s one-lane road behind — quite literally — 40 tour buses. “The 217 Foxconn employees from 17 provinces and 21 factories in China are scheduled to visit many popular tourist sites in Taiwan.” [MIC Gadget]