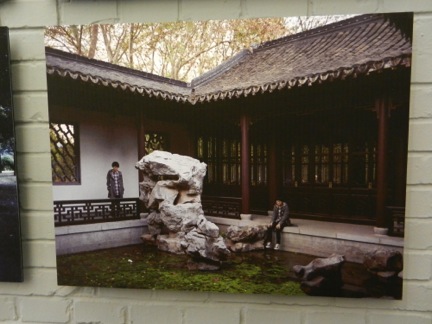 Fan Shisan’s “2 of Us” series (in which the same subject is photographed twice, creating two friends out of one individual) argues that the One-Child-Policy generation is the loneliest generation.

My art critic friend and I walked through a Miyazaki spring wonderland of floating tree sperm to make a point of arriving early to Caochangdi on Saturday. For you see, it was the opening of the third annual Caochangdi Photospring — Arles — an international photography festival brought to you by Three Shadows Photography Art Centre (a gallery in Caochangdi) and Thinking Hands (a platform for cross-cultural art programming and understanding), not to mention the Rencontres d’Arles (a 40ish-year-old photography festival in Arles, France) and the French embassy. An event with this much official collaboration is enough to get me artistically hot and bothered.

In fact, one of Photospring’s strong points is the organization, which may or may not have something to do with the foreign money involved (in contrast, Arles festival is publicly funded; China’s soft power may need some work). Having been to Caochangdi on numerous occasions and knowing how complicated it can be for outsiders, I can say with some assurance that the provision of a map is no small thing. There are even calendars available. I had barely entered this brave new world of intricately orchestrated Chinese art and I was already giddy. Caochangdi Photospring runs from April 21 to May 31, and encompasses somewhere around 30 exhibitions not just at Caochangdi but also at 798 and other locations. The works of more than 200 artists (Chinese and international) are on display. What more could you ask for?

The big opening-day bash was set to kick off at 3 pm, so with time to kill, my art attack dog and I wandered away from our destination and into a small concrete gallery. Canvases covered in little floating schoolgirls and aurora borealis scenes winked at me from the high walls. I took one turn of the room, just to be fair to the artist, and headed straight for the door where my eyes lit upon a glorious sight — snackables. Art openings should not be canapés-optional. I was impressed that this gallery owner knew that a horde of homeless mini-cheesecakes outside Fifth Ring Road will make any painting look better. After squishing the little confection around in my mouth, I warmheartedly chose one painting to hate less than the others, and walked out the front door. 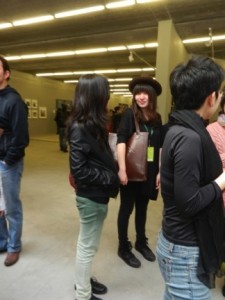 Standing out on the grass, still in the giant Beijing spring snowglobe to watch the opening ceremony, I put up with (Chinese and French people indulging in) back-patting and congratulating. A really cute old Chinese man who was an official speaker said something about a seed that grows into a lovely tree. Cheesy, but you know what? It’s true. This event is truly amazing, and I hope that more events like this spring up. There was no free food, but good art actually does make up for that. (My critic friend hardly complained about having to pay for a coffee, and that’s really saying something.) And even better, there were prizes. This girl to the right won $50,000. Yes, that’s right — United States dollars. And yes, for ART. So if you see Yang Yuanyuan on the street, see if she’s eligible.

Lord knows how long the presentation went on, but eventually, to avoid the movie theater end-credit rush, we just headed back into the galleries.

Some of the artists and their artist statements were downright impressive. Just to pick one at random: Wang Lin used to be a flight attendant, but then she became an artist… then she became a flight attendant again so that she could capture the other beautiful stewardesses of the skies à l’aise. The photographs show female flight attendants in moments when they are not primped to serve you beverages and wipe your lap like Britney Spears in “Toxic.” (Wang Lin won the prize for best female artist with her series “The Tulip in the Clouds.” Congrats, but the prize was in RMB, and for not nearly as much as Yang’s plunder.) Overall, the quality was astronomically higher than what I see on a regular basis in 798 galleries.

As everywhere, there was a small army of cameras snapping and flashing, both at the speakers and at the photos on the walls. Isn’t this just a little too ironic for a photography exhibit? If the schtick of an artist’s work is to take cell phone photos every day for five years, and pick the best ones to display… then what do you call someone who takes cell phone photos of those? Lei Benben’s series “One Day, One Photo” consisted of a five-year cellphone photo-a-day regime, and here you have a girl cellphone photographing the cellphone photos. We’ve reached a new low. 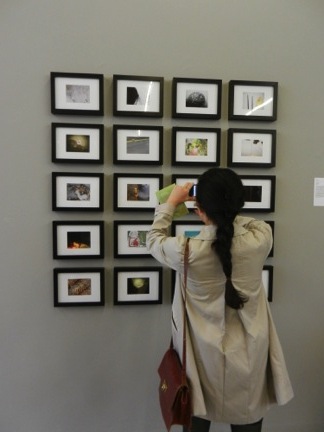 Bad work is bad work. You snack and leave. “Good work” can be a matter of opinion, but I would argue that “good art” lies in the piece’s ability to spark discussion. Caochangdi Photospring does just that.

To see pictures of some of the works, click here, here, or here.

Artist(s) of the Week 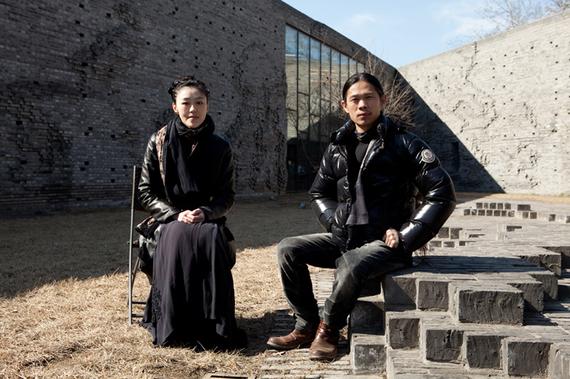 As promised last week, Rongrong is this week’s Artist of the Week, joined by his wife, Inri. They’ve been working together since 2000, and Three Shadows is their baby, which makes them co-organizers (or people closely associated with) Photospring.

Rongrong (b. 1968 in Fujian province) went to the Central Industrial Art Institute of Beijing for photography and then moved to the Beijing “East Village.” In 1996 he co-founded New Photo magazine with Zhang Huan (last week’s Artist of the Week). Inri (b. 1973 in the Kanagawa prefecture of Japan) attended Tokyo’s Nippon Photography Institute, became a photojournalist and then a freelance photographer before beginning her long-term collaboration with Rongrong.

Their collaborative photography hardly feels collaborative — it is the pure merging of two artists into one body of work. Their photography is often of the two together running through large spaces, or in front of destroyed buildings, or with their hair tied together. The only thing that remains the same is that they are always together. Rongrong and Inri have created intimate, poetic, and powerful photographs that can compete strongly in today’s complicated international art market. And there they were on Saturday, long-haired and beautiful, standing like bookends on the opening-day stage.

Yeah, you should go check out Photospring.

One Response to “Yishus: Caochangdi Photospring, Where You Can Take Pictures Of Pictures”