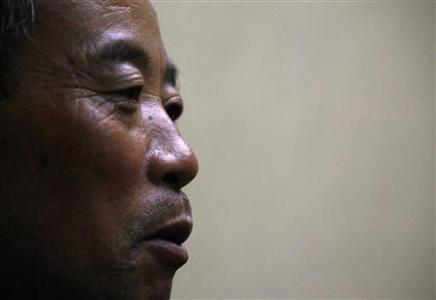 Here’s Tania Branigan of the Guardian:

The brother of the Chinese activist Chen Guangcheng has fled his family’s captors in a second audacious escape from their village in eastern China.

Chen Guangfu arrived in Beijing early on Thursday morning after breaking out of Dongshigu, where relatives have been living under tight guard since his brother, who is blind, fled to the US embassy in Beijing last month, according to lawyers in the capital.

Maybe the people at Dongshigu should, you know, not be trying to keep people under house arrest. That’s the correct conclusion to reach after all this, right?

“I met Chen Guangfu this morning. His health situation is OK,” said Ding Xikui, a lawyer authorised by Chen Kegui’s wife to represent her husband.

“His family are not allowed to leave the village. Chen escaped secretly. He came here to tell us what happened that night [when people broke in] and seeks help from the lawyer. He also supports the request from Chen Kegui’s wife to engage us as his lawyer in this case.”

UPDATE, 5/27: He’s now missing, or possibly back at Dongshigu. According to Reuters:

The brother of blind Chinese activist Chen Guangcheng who was reported to have gone missing has returned to his village in northeastern China, a lawyer said on Saturday.

The short disappearance of Chen Guangfu had sparked concerns he was the latest target of government reprisals against the family of the activist, who escaped from his village in late April after 19 months of detention at home.

Shandong-based lawyer Liu Weiguo told Reuters Chen Guangfu had returned to Dongshigu village. Liu earlier said the activist was “very worried” about his brother’s disappearance and was contacting friends to look for him.

2 Responses to “As If We Needed More Proof Of Dongshigu Officials’ Incompetence, Chen Guangcheng’s Elder Brother Has Escaped As Well [UPDATE]”