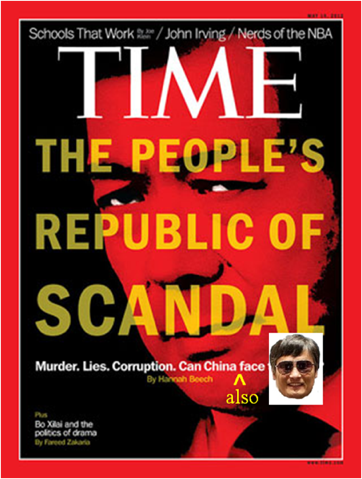 I’m in Tianjin this weekend, so if Beijing burns while BJC posts videos of fiddlers, please note it would only be a coincidence. Here’re Chen Guangcheng links.

Headline: “China hints at solution to standoff over activist.” At a Foreign Ministry briefing, spokesman Liu Weimin also confirmed that Chen faces no pending criminal charges, indirectly acknowledging that the house arrest he and his family endured the past 20 months in their rural home was the retribution of local officials for Chen’s activism. Chen has exposed forced abortions and other abuses in his community as part of China’s population controls. // ‘According to Chinese laws, he is a regular citizen. He can absolutely go through regular formalities by normal means,’ Liu said.” [Associated Press]

Read the above again.

Chen: “My fervent hope is that it would be possible for me and my family to leave for the U.S. on Hillary Clinton’s plane.” “I’ve known Chen Guangcheng for more than a decade—he’s been through intimidation, beatings, jail, and extralegal house arrest—but through it all I never sensed he was scared. Now he’s scared. Chen, whose case has escalated into a bilateral crisis that threatens to dominate Secretary of State Hillary Clinton’s visit to Beijing this week, was weeping as he talked to me over the phone from his hospital bed.” [Melinda Liu, The Daily Beast]

US State Department denies it “forced” Chen out. “‘U.S. interlocutors did make clear that if Chen elected to stay in the Embassy, Chinese officials had indicated to us that his family would bereturned to Shandong, and they would lose their opportunity to negotiate for reunification,’ [spokesperson Victoria] Nuland said. ‘And at no point during his time in the Embassy did Chen ever request political asylum in the U.S. At every opportunity, he expressed his desire to stay in China, reunify with his family, continue his education and work for reform in his country. All our diplomacy was directed at putting him in the best possible position to achieve his objectives.’” [Time]

Pulitzer Prize-winning reporter Ian Johnson: “The story of a blind Chinese lawyer’s flight to the US Embassy in Beijing is likely to ignite accusations and recriminations until the US presidential election in November. But what few will acknowledge is a harsher truth: that for all our desire to effect change, outsiders have little leverage to shape China’s future. This isn’t to say that China is permanently stuck in an authoritarian quagmire and outsiders can only watch. On the contrary, people like Chen Guangcheng show how China is changing: from the grassroots up, by ordinary citizens willing to assert their rights and push change.” [The New York Review of Books]

Netizens call bullshit on China for its demand of US apology. “Instead of asking America to apologize, netizens mostly think the Chinese government should tidy up its own house first. Many called the Chinese government response ‘shameless’ and lamented the fact that the U.S. embassy had become the de facto ‘Letters and Visits Office’ (信访办), the appeal of last resort for Chinese aggrieved by local injustice. One netizen asked a simple question: ‘Why do the citizens of one country have to rely on another country to protect them?’ Another wrote, ‘Our own guy runs into [their embassy] himself and they want others to apologize. What the heck kind of logic is this?’” [Tea Leaf Nation]

Once again, excellent reporting by the WaPo. “In a telephone interview early Friday, Chen said he does not blame American officials for his plight after leaving the U.S. Embassy under a deal they helped strike. But he accused Chinese officials of reneging on their promises to fully restore his freedom.” [Washington Post]

On a serious note: I’m not sure I’d want to spend years in the US Embassy, but the Canadian Embassy has an amazing lounge, game room, bar and outdoor swimming pool. (Seriously.) “‘He knew the stark choices in front of him,’ [Gary] Locke told reporters of Chen, who at one point in talks with the Americans demanded to speak to Premier Wen Jiabao. ‘He knew and was very aware that he might have to spend many, many years in the embassy. But he was prepared to do that… // ‘And he was fully aware of and talked about what might happen to his family if he stayed in the embassy and they stayed in the village in Shandong province.’” [Reuters]

On hiding in foreign embassies. [BBC]

UPDATE, 10:48 pm: One more (Chen’s really brought out the best in reporters)…

“The American Beacon in Beijing: Why Chinese Look to the U.S. for Freedom.” [The Atlantic]