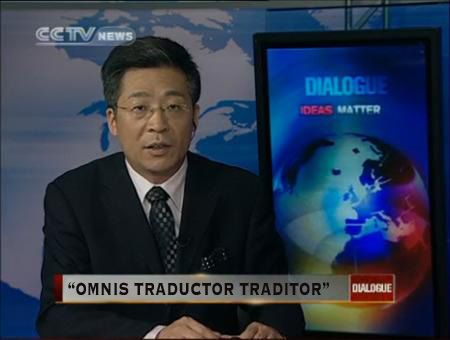 We think Yang’s wording was too harsh. He only stressed the problems of illegal immigrants in China without mentioning the contributions other foreigners have made to the country. He slammed many foreigners, which made it a media sensation and led to misunderstanding among foreigners.

No, we don’t misunderstand. We’re not upset at Yang because we think he hates all of us. And we certainly don’t need Yang to pat those “other” of us on the back or expose the assholes in our group (we can do that just fine ourselves). The problem with Yang Rui’s remarks right now is what the problem has always been: he is a public figure with incredible influence — that rare ability to promote understanding and a better world — and he’s lived — is living — way, way down to that potential.

That’s disappointing. But you know, everyone has lapses of judgment; what everyone does not do is look upon their mistake and think, You know what? Upon further review, it wasn’t my fault that I wrote this offensive rubbish; all these problems lie with your misunderstanding. It lies with that damn translator, traditor — traitor — who used the word “bitch” instead of “shrew” — hussies and strumpets, all of ’em (that’s what I say when I’m really angry).

At the risk of conflating Shan Renping and Yang Rui (we know they’re not the same), Shan wrote in defense of Yang, “The anti-foreigner campaigns seen in some Western countries will not be staged in China.” Huh? RELEVANCE?

With every further word that Yang Rui utters that is not an apology, he loses that much more professional credibility, which moves him that much closer toward deserving a sacking. His apologists have yet to understand the reason for this. They seem to not care that high-profile people, like a host on CCTV, especially one who makes a living talking to foreigners, should be held to a higher standard, or at the very least, held accountable for their actions.

Let’s just take a glimpse at the kind of response Yang Rui has inspired. Here are some comments underneath Shan Renping’s column:

I think Rang Rui should be praised for his good deeds. Many foreigners are here because they  want to money and a lot of the guys are after our Chinese girls.

I wonder what would have happened if someone had used the same language, but directed it at the Chinese government?

Granted, the chances of all three being from the 50-Cent Army are exceptionally high, but these are the type of reactions that Yang Rui and Shan Renping are incubating. There’s something wrong with that. Disappointing, one might say.