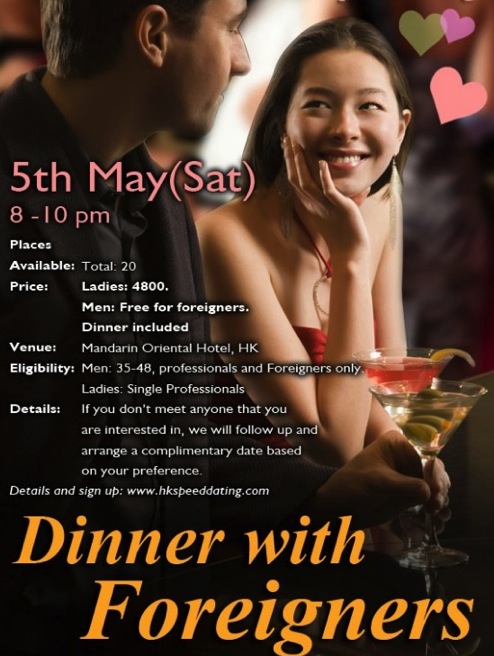 Plenty of people nurse a healthy loathing of the “expat in Asia,” and in some instances, that antipathy is understandable, if not justified. (The image you want is of a mustachioed former mill owner, old and white, in Thailand. If you’d like to see some of these fellas here, try the bar Maggie’s.) Yet I’ve always thought the expat community in Beijing was just fine, no Lost Generation by any means but not lacking in personality and charm, comprising foreigners who want to be here as opposed to foreigners who seek to game the system for a few bucks or an easy bang.

But if I ever see an ad like the above, which was spotted in Hong Kong, I’ll know I’ve been proven wrong. And that’ll be the day I hate the world a little more.

The Dictionary of Politically Incorrect Hong Kong Cantonese (Bad Canto) uncovered an ad for a speed dating event — probably happening as we speak — organized by a company called HK Speed Dating. Ladies pay 4,800 HKD to get in, while foreigners — assuming they are between the ages of 35 and 48 and well-monied — get in free, dinner included.

A lot of netizens have predictably called out this company for its bullshit event, but this one comment from Fiona, translated by Bad Canto, is perhaps the best:

This advertisement is not speed dating at all. This is human flesh trading, humiliating Asian women. The website doesn’t have traditional Chinese, and it is only in simplified Chinese. Basically, it targets Mainland Chinese women, helping them to use an alternative way to get foreign residencies and passports legally. It profits from Mainland Chinese longing desire to leave Strong Country (*China).

It shifts the focus. Never mind, for a second, the sleazy first-world man out to play the white knight in the third-world country. What about the girl, tired of waiting for her savior, deciding to actively seek that passable facsimile of a modern prince? Isn’t there something to be said about her initiative, or ambition, or broader gender issues?

Alas, I’m not a rich Chinese female, so I have little more to add. But I am an expat, and I have enough white friends to be able to throw this out there: white men reap the benefits of their skin color in China as much as they do elsewhere in the world, I get that, but must the Chinese make it so obvious?

In the interest of fairness, at least one foreigner (so he says) who posted on this story seemed to be fully aware of the absurdity of these high-end speed dating events targeted at rich Chinese woman (as in, they’re the ones paying big money). We’ll leave you with his comment thread: 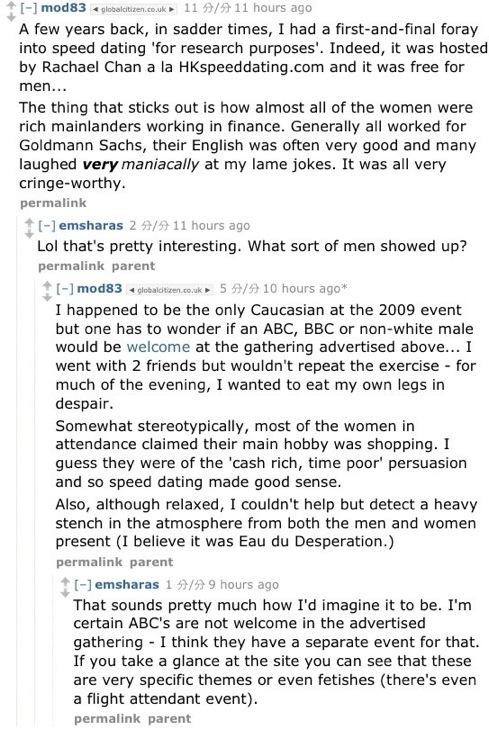