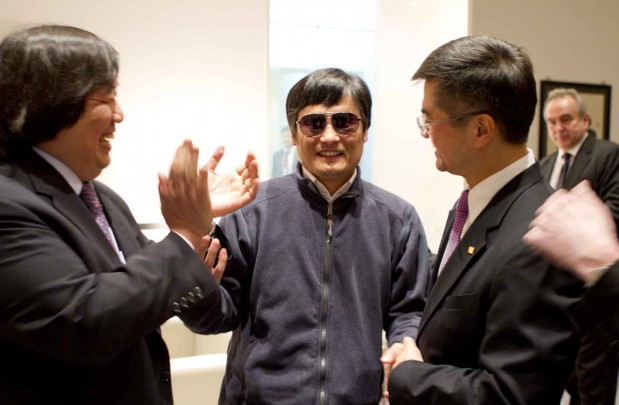 When is a book not a book? When it is written in the mind, perhaps, or when it is written by a politician. My proposed book about modern China has been somewhat taken over by events, but it had all the makings of good satire. The location: in a country dedicated to GDP growth, a remote village whose entire economy is dependent on the continued corrupt incarceration of an inharmonious lawyer. To make things more dramatic, our lawyer-hero is not just a pro bono auto-didactic legal expert who took on local chieftains over the forced sterilisation of women, but he is blind and frail. He has a six-year-old daughter – she’s also on the receiving end of official harassment. He has an eight-year-old son – hasn’t seen him since his house arrest two years prior. Throw in some Ah Q-isms: the local bosses are proud that their rule-of-law flouting is so much more flagrant, so much more vile than anybody else’s. “Nobody does corruption and bullying like Linyi village” could be the new billboard welcoming curious tourists.

Meanwhile, the country’s top leaders are caught up in a public spectacle involving a senior political figure’s wife, a dead Englishman and a host of wild allegations that threaten to make a mess of the once-a-decade orderly transition of power. The state media, determined to keep a clear head, assures everyone repeatedly that this proves the country is governed by law – not apparently aware that such constant reminders suggest exactly the opposite. The foreign media take the latter as their cue, kicking up a shitstorm of claims.

The novel’s plot turns on an absurd sequence of events, where the lawyer escapes his extralegal imprisonment via an outlandish plan involving eight walls, 100 guards, a 20-kilometer walk through a darkened forest and a lone car waiting in the night. He goes on the lam, bound for what he considers the highest, safest authority in the land – not the petitions office, nor the police, nor even the Supreme Court or the quarters of Grandpa Wen, the country’s lovable reformist premier, but the US Embassy in Beijing, a fortified compound in one of the quietest districts in town.

Once there, it seems all is well: the lawyer’s staunchest foreign defender happens to be in town, and to help matters, she’s the US Secretary of State. He could scarcely have timed this better. But this is satire, so it cannot end so happily: the story concludes with the blind lawyer in a Chinese hospital bed, surrounded by village goons, on the phone to a line in the US Embassy that never answers. Across town, trade talks are in full swing: the Secretary of State talks shop with her Chinese counterpart, who smiles his assurances that all is well, all will be well.

It Takes a Village will never be written – it doesn’t need to be. The Secretary of State, Hillary Clinton, wrote her own book of the very same title (very different subject matter) some years ago. It was about child-rearing, volunteering and the community work involved in bringing up a baby, an upbeat inoffensive PR pamphlet that was received politely without anyone really reading it (who reads books by politicians? Like I said before, they’re not books).

The Chinese It Takes a Village had a rather more pressing message: it showed that, like Hitler’s willing executioners, it wasn’t just a few rotten officials and their hired goons that kept Chen Guangchen under illegal lock and key in Dongshigu village, Linyi – it was the whole village, the whole damn town, the whole county in cahoots. Their paymasters in Beijing knew full well what was going on and yet did nothing to prevent it. Now the country knows about it (via a steaming two-paragraph editorial in Xinhua that will mean virtually nothing to anybody not familiar with the background) and it’s on them now – the Chinese.

I don’t know to this day what was or is in it for the CCP nexus to act this way regarding Chen; certainly they don’t have the bitter, personal grudge that local officials nurse. But I would like to know what Clinton’s spokesperson meant about the Chinese keeping their promises and how they’re looking at NGOs and the media in China to make sure they do. NGOs and the media have been doing exactly this since 2005 to no avail. And Missus 4-am-Phone Call, the go-to girl when you have an inconvenient crisis, where was she when Chen supposedly called her last night wondering why he’d been left alone contrary to all those consular promises?

So the US have let the side down again, and now it’s on China. It takes a whole village to make something like Chen Guangcheng’s seven-year hell happen, and a whole village will happily take him back into its clutches… unless higher powers, more sensible minds decide the country is no longer willing to abide by such tactics, that leaders lining their own pockets and looking the other way is not a coherent long-term strategy to building a proper, respectable 21st-century lawful power. But when the World Police’s sheriff and her deputies are so eager to rush the man out of the building and start trade talks that they forget to make even the most basic precautions for his welfare, how could we possibly expect China to do better?

RFH can be reached at rfh@beijingcream.com.

One Response to “It Also Takes A Village To Free A Man, Ms. Clinton. Where’s Yours?”