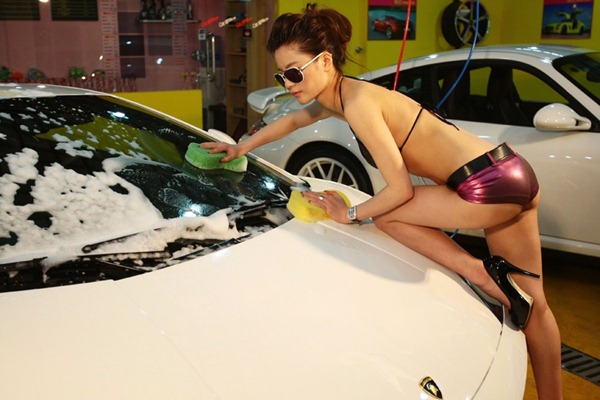 At a carwash in Shanghai [Netease via Ministry of Tofu]

Have you voted in the BJC Bar and Club Awards yet? If no, why not? While you self-flagellate for your offense, here’re links.

So now we know diplomats can act like children. “‘I don’t want to talk to him anymore,’ Cui Tiankai, the vice foreign minister, erupted after Mrs. Clinton intervened, gesturing toward Kurt M. Campbell, an assistant secretary of state and a crucial negotiator. // The confrontation was a pivotal moment in a diplomatic drama replete with unanticipated twists, threats and counterthreats, and at times comical intrigue. Mr. Campbell, for example, took to sneaking out of his hotel in Beijing through an entrance by the garbage bins to avoid public attention. // The Chinese security apparatus, meanwhile, aggressively tapped and blocked phone calls by embassy officials, with an agent at one point brazenly dialing into a conversation between Mr. Chen and his wife on the cellphone of the deputy chief of mission, Robert S. Wang. The Americans, fearing that the Chinese would restrict access to Mr. Chen’s hospital, even considered disguising an employee as a nurse to gain entry.” [New York Times]

A bit of good news. “China’s granting permission for blind dissident lawyer Chen Guangcheng to exit the country to study law at New York University, plus other developments, indicate that Beijing may now be committed to improving relations with the United States. At least in the short term.” [Christian Science Monitor]

Except this one. Jon Huntsman is good. In his words: “In crafting an effective approach to the U.S.-China relationship, we need to understand China and all of its complexities—not engage in hyperbole or wishful thinking…. // There is no other relationship in the world that, if mismanaged, carries greater long-term negative consequences for the U.S., the Asia-Pacific region, and the world. By contrast, wise stewardship of the relationship will make us and our allies safer, wealthier and more confident about global stability in the future.” [WSJ (paywall), full text via Reddit]

Still thinking about doing business here? “In today’s China, business deals are hardly ever carried out fairly. Mostly it’s a matter of who you know, or who you pay off, and then the proceeds are divvied up and down the chain of corruption…. // I will never forget something Mr. Zhao said to me: There’s not a single straight road in China; they were all built with kickbacks. // No one stays clean when traveling along these sparkling, yet tainted roads. Corruption is the norm, it has become the unwritten law, an article of faith. It is everywhere. You don’t have to engage corruption, corruption engages you. It follows you, no matter where you go. No one can stay clean.” [Murong Xuecun, NY Times]

Meet Melissa Chan as martyr. “Every journalist in China – and not just the foreign press corps – is watching to see what happens next.” [Globe and Mail]

This lawyer sets a new low for lawyers by suing makers of 2010 video game, Kane and Lynch 2: Dog Days. “The game is set in Shanghai, and depicts the city as a slum with shabby and sordid streets. Chinese people in the game are characterized as cowardly and timid, and a player’s objective is to kill them. // ‘As a Chinese lawyer, I have the obligation to protect the rights of all Chinese,’ Liu noted.” [Global Times]

Chen Guangcheng: not very famous here, making him the reverse Dashan. “Mentioned one minute, gone the next, Chen’s case is a textbook study in how the authoritarian government manages information in the global Internet era. Unable to block all mention of Chen, censors try to minimize it while occassionally releasing editorials to purvey the government line.” [Huffington Post]

To answer this writer’s rhetorical question: unlikely. “Nowadays Chinese leaders seem too busy putting out fires to think about their regime’s long-term survival…. When rulers of one of the most powerful countries in the world have to worry about the defiant acts of a blind man, it’s high time for them to think the unthinkable: Is the Communist Party’s time up?” [Minxin Pei, WSJ]

Corollary: However… “China’s ruling Communist Party is seriously considering a delay in its upcoming five-yearly congress by a few months amid internal debate over the size and makeup of its top decision-making body, sources said, as the party struggles to finalize a once-in-a-decade leadership change.” [Reuters]

Corollary: And bad eyesight because of that, maybe. [The Week]

Really, is there anything we consume that doesn’t contain formaldehyde? (Don’t answer.) “Vegetable sellers in China have been caught spraying cabbages with a formaldehyde solution to keep them fresh in transit, the state news agency Xinhua has reported.” [BBC]

This looks wonderful: “In Bad Panda, a new play produced by theater group Monster Down!, it’s the panda apocalypse and Gwo Gwo is caught between his attraction to Chester the gay crocodile and his mating partner, Marion.” [the Beijinger]

What is the Chinese dream? Adapted from James Fallows’s new book. [James Fallows, The Atlantic]

Some Chinese Olympic athletes forced to give up meat. [Global Times]