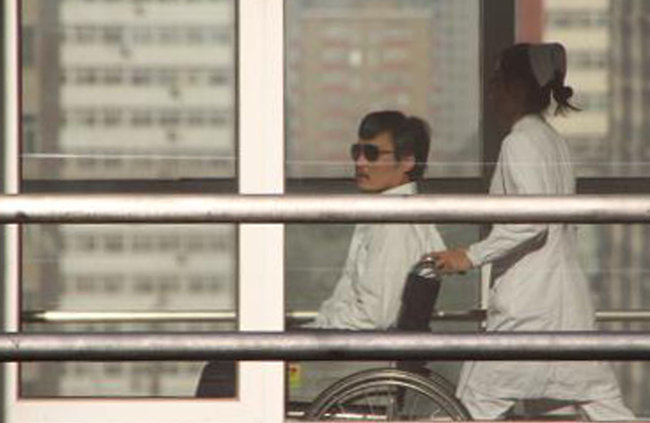 Went on BBC World Service’s World Have Your Say show again this evening to talk about Chen Guangcheng with some bloggers you’ll recognize, including C. Custer of China Geeks and Yaxue Cao of Seeing Red in China. By the way, there are many great stories related to China from these past two days that have nothing to do with Chen Guangcheng. We’ll get those to you later, because here are your CGC links.

News that’s old (potentially) within three hours (see below): “Chinese dissident Chen Guangcheng left the U.S. Embassy in Beijing on Wednesday ‘of his own volition’ after six days, the Foreign Ministry said, and a senior U.S. official said he planned to stay put in China.” [Reuters]

The best place to watch for breaking news on Chen Guangcheng is Twitter and Sina Weibo (the latter better than the former, really). Tweeted Philip Pan just now: “RT @ChinaGeeks: @zengjinyan says CGC did want to stay in China, but has changed mind, wants to leave to protect wife/kids. Still in hospital” [@panphil]

The above was posted at 10:45 pm local time. At 11:10 pm: “Blind legal activist Chen Guangcheng says a U.S. official told him that Chinese authorities threatened to beat his wife to death had he not left the American Embassy. // Speaking by phone from his hospital room in Beijing on Wednesday night, a shaken Chen told The Associated Press that U.S. officials relayed the threat from the Chinese side. // Chen, who fled to the embassy six day ago, left under an agreement in which he would receive medical care, be reunited with his family and allowed to attend university in a safe place. He says he now fears for his safety and wants to leave the country.” [Associated Press]

Probably the best, most concise write-up of what exactly happened this evening. “Blind activist Chen Guangcheng, who fled de facto house arrest last month and sought refuge at the U.S. Embassy, left the diplomatic compound on Wednesday to seek medical treatment after receiving assurances from China’s government that he would be treated humanely, U.S. officials said. // The Chinese government agreed that Chen would be reunited with his family, moved to a safe place and allowed to enroll in a university, the officials said. ‘We understand there are no remaining legal issues . . . and that he will be treated as any other student in China,’ said a senior official.” [Washington Post]

If you’re really behind on this Chen Guangcheng thing, go here to find all the links you could possibly need to catch up. [Free CGC]

How belated this story is… yesterday I wrote about this snippet: “This could be a good sign in the Chen Guangcheng case if you read it as authorities laying the groundwork for justifying Chen’s impending reprieve.” “’They are all free citizens,’ Hu quoting the police officers as saying. ‘For them to come to Beijing and so on, there is nothing illegal about it. They are free to do so. They did not do anything wrong, they have no legal trouble. We just want to understand the situation and verify it.’” [Washington Post]

No word on whether CNN spoke to people in Wangfujing or Fourth Ring Road or Haidian. Presumably they know there’s a huge difference. “CNN spoke to nearly 40 people on the streets of Beijing and could find only two people who even know — or claimed to know — who Chen is. // ‘It was on Weibo and some people are still re-posting. It went on circulating for a while before the topic started to get censored,’ one man said.” [CNN]

Headline: “This Blind Chinese Lawyer May Be the Toughest Foreign Policy Challenge Obama Has Ever Faced.” [The Atlantic]

UPDATE, 12:51 am: One more, sorry for missing this earlier: “Chen Guangcheng, the blind Chinese activist who sought refuge in the U.S. Embassy in Beijing, said Wednesday that he had been told Chinese officials threatened to kill his wife and that he now wanted to leave the country.” [MSNBC]

Your Garfield at a Chinese restaurant interlude:

If you want to read Global Times’s take before TAR Nation takes ‘em down again next week, have at it. [Global Times]

2 Responses to “Mid-Week Links: The Chen Guangcheng Story Is Moving Fast, So Here’s To Help You Catch Up [UPDATE]”