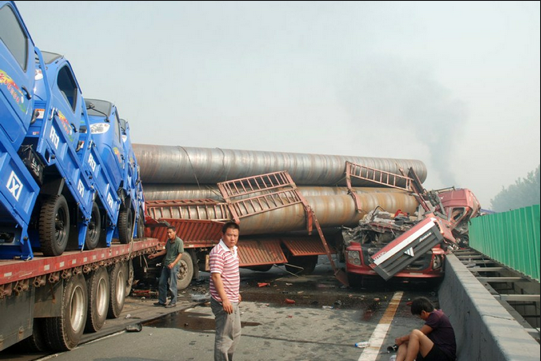 An accident that killed eight people on Monday afternoon, via NetEase

There’s a “Beijing Creatives” meeting happening right now at Great Leap Brewing, winner of the “Place in Which You’re Most Likely to Hear the Phrase ‘You’ve Probably Never Heard of Them’” award in the BJC Bar and Club Awards. Go check it out and show them how creative you are by reading these links.

On being a “foreigner,” etc. “I would like to propose the following – that we expats living in China improve our efforts to police ourselves. When we hear our friends talking about looking for work, we push them to get the proper visas. When we see obnoxiously drunk expats staggering out of a bar, we get them into a cab and on their way home. When we hear of teachers sleeping with their own students, we take action to protect their students. You can also focus on your own behavior- like withstanding the pushing on the bus without screaming and maybe even give up your seat when no one else is willing. Reply to as many ‘Haalllooows’ with a friendly smile and wave as long as you can stomach. As unfair as it is, remember that wherever you go, you’re not only representing yourself or even your country, but all waiguoren, all ~5.6 billion of us.” [Seeing Red in China]

This comment about sums up my reaction: “I’m so upset, the citizens of our country…”: “In Linyi city of Shandong province, a post-80s generation young man who helped an injured elderly person who was trapped under an electric tricycle due to a traffic accident was instead wrongly accused as the perpetrator. Fortunately, after the Hedong district police of Linyi city checked the surveillance footage of the intersection, the entire course of the young man’s good deed in aiding the old man was restored.” [chinaSMACK]

Luckily, it’s not like we at BJC are fans of puns or anything. “The service, Sina Weibo, imposed ‘user contracts’ that award each of its 300 million microbloggers a starting score of 80 points. // Points can be deducted for online comments that are judged to be offensive. When a blogger reaches zero, the service stated, a user’s account will be canceled… // Most notably, the contracts also will punish time-honored tactics that bloggers have used to avoid censorship, like disguising comments on censored topics by using homonyms (where two different Chinese characters have nearly identical sounds), puns and other dodges.” [NY Times]

On China’s Internet: “As reader #3 says, ‘the question is whether or not China can build a world-class society while building a giant intranet that is China-specific.’ By my lights, the answer to that question must be No. Everything I have learned about the world tells me that ‘world-class’ powers must be open to the world.” [James Fallows, The Atlantic]

Cop breaks car window to administer breathalyzer. “We assume the result was not favorable, which begs the question: What did the driver think was going to happen?  Then again, the driver was likely not in a state conducive to lucid, rational thought.  Or perhaps he knew all too well the new, beefed up penalties in China that have made drunk driving a criminal offense.” [Tea Leaf Nation]

The end of the grand experiment to take 300 shots of baijiu. “I started my blog by confessing that I did not like baijiu, and now I end my journey with another: I started liking baijiu months ago. By ‘liking,’ I don’t just mean ‘tolerating,’ either. I mean enjoying the taste of baijiu, enjoying the ritual of baijiu drinking and enjoying the surprising fact that it rarely produces a nasty hangover. I could tolerate baijiu very early on, after, say, 50 shots. By around 100 my feelings were neutral and by 200 I happily downed just about anything put in front of me. Sauce aroma, strong aroma, Erguotou, whatever. I could drink it all. I don’t believe it takes 300 shots to start liking baijiu – it takes far less.” [300 Shots at Greatness]

To castrate or not castrate? “The South Korean Ministry of Justice announced last week it would use chemical castration on a repeat sex offender, who violently sexually assaulted four children under the age of 13… Do such measures work? Should they be introduced in China? The Global Times invited three commentators to contribute their thoughts.” [Global Times]

At least this knockoff iMac looks good. “But if you turn it on and use it, you will find out it’s a slow, underpowered and cheap PC.” [MIC Gadget]

Where all the women bloggers be? [Stan Abrams, China Hearsay]

One Response to “Mid-Week Links: Sina Weibo pushes censorship onto users, a Good Samaritan is saved by surveillance tape, and be better, foreigners”