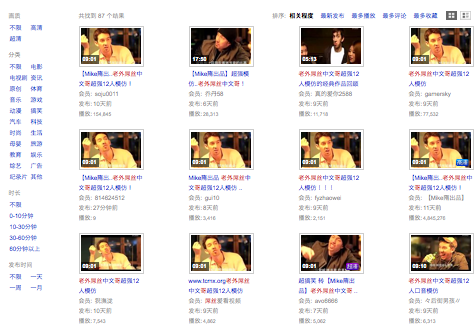 You might remember Mike Sui as the teacher/singer/host/actor who imitated a bunch of people in a video that made it big on Youku. Everything he does on Chinese media these days is rising to the top, evidenced by the latest product, the above below [Ed's note: I'm putting it after the jump because there's an ad that auto-plays], which was posted close to 11 pm last night and already has 136,418 views. The seven-minute clip, in which Sui participates in a translation contest with one of the show’s hosts, comes from a longer 48-minute Sina Weibo Show. It won’t be very interesting for those who don’t speak Mandarin, except for one curious moment around the 3:40 mark when the other host flips over a whiteboard in which she translated a phrase as “Your Fxucking Sister” (the x was there to signify, I don’t know, that “fucking” is inappropriate to use on TV). Sui titters a bit. The other host then reads the phrase out loud, and it’s all fun and games. Until a poor kid’s ears begin to bleed, I guess.

To give you a better idea of how on fire Sui is, check out the results of a Youku search for his Chinese name. He himself did not upload his one-man act 20 times. Netizens loved him so much that instead of linking to the original, they ripped his work so they could have it for themselves. Imitation is the greatest form of flattery, of course — until maybe it relegates the original to the second row of search results.