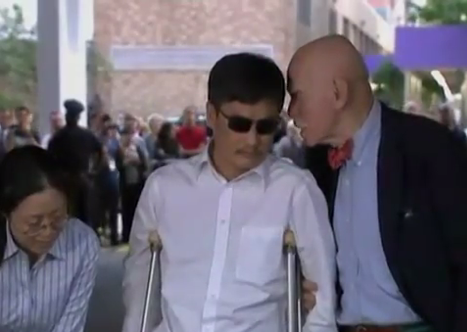 Chen Guangcheng arrived in New York on Saturday. The bow-tied man in the above screen capture from this video is Jerome Cohen, Chinese law expert at New York University, who shepherded Chen through all manners of obstruction and has secured him a fellowship to study at NYU. After the jump, links to the latest CGC stories, with China experts weighing in.

Evan Osnos: “By the standards of official Chinese conduct in many other areas, its handling of Chen’s departure was restrained and calm. And that is one of the modestly encouraging facts to emerge from the final accounting of this whole complicated business: presented with diplomatic dynamite, neither China nor the United States succumbed to its worst instincts. The American handling of the affair was far better than the fevered early indictments suggested, and the Chinese have, so far, kept their promises to Chen and the United States. Those involved should take confidence from that.” [New Yorker]

Orville Schell: “At the same time, another quite counter-intuitive revelation seemed to dawn on Chinese leaders. Just as they were becoming more resistant to pressure, they also seemed to conclude that in certain instances, it was probably better to just exile dissidents and “get them off the lot,” so to speak, so that they would not continue to be an endless source of damaging international criticism and bad publicity. They seemed to pragmatically conclude that the cost/benefit ratio of yielding to outside pressure and removing the source of the irritation and contention was actually pretty favorable to them.” [Asia Society]

Perry Link: “But the problems of human rights in China are not problems of one or two people whose cases have to ‘be resolved.’ It’s a very deep, underlying long-term problem and we should view it that way.” [NPR]

A reminder that Chen’s supporters are still at risk, and will continue to be if Americans continue making dumb statements like this: “But the Democrat former House speaker Nancy Pelosi described Chen’s flight to the US as ‘a milestone in the cause for human rights in China.’” [The Guardian]

Interesting? “Chen, whose passage to the U.S. was brokered in part by officials from New York University, is now housed in NYU’s major faculty residential complex, Washington Square Village — a set of 17-storey slabs comprising nearly 1,300 units. Of all the places for the wantaway dissident to end up in New York’s tony Greenwich Village, Chen’s new home is Lower Manhattan’s closest approximation of a Soviet-style (or, indeed, Beijing) housing estate.” [Global Spin, Time]

Screenwriters, you around? “Chen Guangfu [Chen Guangcheng's brother] couldn’t believe that a blind man could manage to escape under such close monitoring. ‘My first thought was that they had intentionally let him escape, so that they would create a car accident while my brother [CGC] was at it, kill my brother, and end the whole thing.’” [iSun Affairs, via Tea Leaf Nation]

A reminder that Internet commenters on popular websites like CNN and Yahoo are probably legitimately scum of the Earth. “Nevertheless, a situation like this once again rings an alert to me and maybe many other China bloggers and reporters who, in many cases, are trying to make sense of China through its active online population. Comments from a few hundreds of netizens may make good stories or provide different perspectives, but in no means do netizens’ reactions, however unified, represent the whole picture, especially considering that China has a population of 1.3 billion and only a little more than 30% of that number are internet users.” [Offbeat China]

One Response to “News Of The Weekend: Chen Guangcheng In New York”