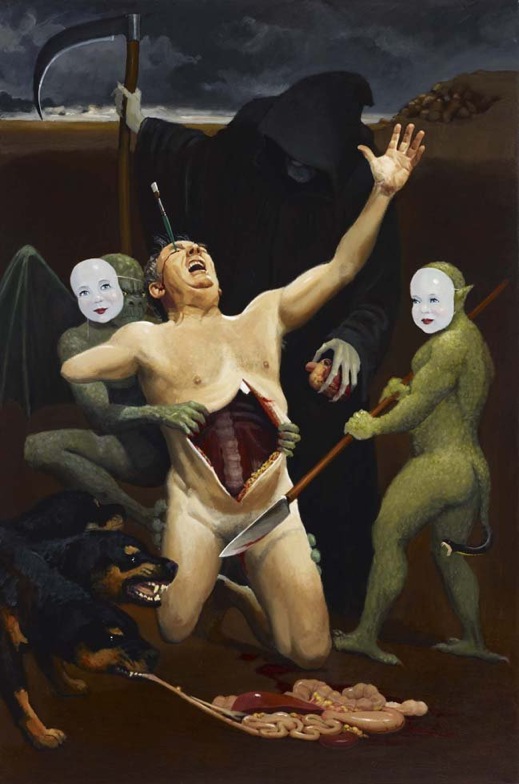 Journos out there, know this: it’s the Global Times’s world, we just live in it. Here’s the lead (lede) from a Sunday article by Sima Pingbang:

Poker players all know that in most trick-taking games, the face cards are normally the best. However, the “2″, generally the lowest in rank, can become a special trump under certain game rules. It can even turn a losing game completely upside-down, if used properly.

I am absolutely in awe of these three sentences. I’ve read it at least a half-dozen times without reading the second paragraph, because this lead is a glorious testament to the holy ghost of ledes. Global Times lede, how do I love thee? Like a trick-taking poker player, let me count the ways. Players of this card game called poker all know that face cards are normally the best, like the ace. The BSD ace, big swinging dick, that face card. But the “2,” in some games like the college drinking game Asshole, otherwise called “Big 2,” is actually the best, even better than those face cards. It can even turn a losing game completely upside-down, meaning I don’t know what the fuck this means.

Hang on, let me go read the second paragraph, just wait right here for one second…

What I’m arguing is not about card games, but blind Chinese activist Chen Guangcheng, who has sadly become a trump in US political games.

I and a few friends were able to visit Chen last December at his hometown, Dongshigu village in Linyi in Shandong Province.

To our surprise, Chen’s reputation wasn’t as far-reaching as we have learned from the Internet. Most people living there had never heard of him or his deeds, including the resourceful local taxi-drivers. This hugely imbalanced fame of Chen’s between cyberspace and the reality disappointed me.

I remember him saying “my problem can only be solved by the UN. I only trust the UN, and it will come to save me sooner or later.”

To be honest, I was quite an admirer of Chen when I first learned of his deeds as a disabled rights activist. But after hearing this attitude, I suddenly didn’t know what to say.

He was pursuing rights for farmers and disadvantaged people. But later he was completely bewitched by the belief that only the US government can save him.

Um, okay, how do I make this stop?

Moreover, according to other villagers, Chen’s imprisonment a few years ago had nothing to do with his work. It was actually a pretty common local conflict.  They told me that Chen built a deep well using funds he received from a British source. But that well sucked out water from other wells in the village, which meant Chen effectively controlled the village’s water.

They claimed that Chen charged high fees for the water and caused discontent from villagers, some of them then openly voiced their unhappiness and that angered Chen. So he asked his family members to attack the village committee and blocked public roads in order to vent his anger.

Where does Big Two come in? I thought this was a poker article about face cards, and trumps…

Chen has served its term in jail for his misbehavior. But this legally justified sentence had somehow become a reason for the US to promote him as a so-called oppressed human rights activist. The US deceived Chen into becoming a pawn in its plot against China.

Mother of Hell, I just finished the article.

You journalism students out here, let this be a lesson in how to lure readers into a story: write a batshit crazy lead. Talk about V-8 engines in a piece about the Main Street convenience store holdup. Spin a yarn about riding sidesaddle, with full sexual innuendo, in the city council roundup. “Bilbo Baggins bagged a bimbo” is always is a good way to introduce a vox pop. And if you absolutely, positively cannot find anything worth reporting, just make shit up, preferably starting with the byline. Go with “By Zorg Crustcrust.” Do all that and, upon graduation, there’ll be a cushy job awaiting you at a state-owned newspaper… and the deeds to your soul.

UPDATE, 8:20 pm: Just saw that Eric Fish of Sinostand posted about this same editorial earlier. He did research, too, so go check it out.

3 Responses to “Today In Great Newspaper Ledes, And By “Great” I Mean The Worst”