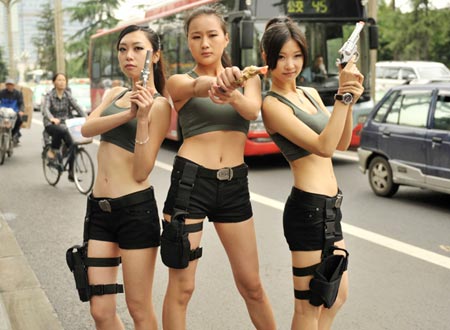 Students in Chengdu who are “on a ‘kill’ mission for illegally parked vehicles at the West China Second Affiliated Hospital of Sichuan University,” according to Want China Times.

Happy Memorial Day for those in the US. We’ll have a relevant post about that soon, after links.

A trend that is unlikely to reverse. “The phrase ‘naked official,’ or luo guan, was coined in 2008 by a bureaucrat and blogger in Anhui province, Zhou Peng’an, to describe officials who have moved their family abroad, often taking assets with them. Once there, they are beyond the clutches of the Communist Party in case anything, such as a corruption investigation, should befall the official, who is left back at home alone (hence ‘naked’)… // Officials who can afford to send their families abroad are usually the most powerful, and the most aware of China’s problems. Says Mr Li of Peking University, ‘They know better than anyone that the China model is not sustainable and that it’s a risk to everybody.’” [Economist]

If you’re not already too angry at officials, here’s another. “As the lure of the market grows ever greater, and the Communist Party refuses to fetter its enormous administrative powers or subject itself to any laws, ambitious officials and entrepreneurs have found it difficult to accumulate wealth and impossible to defend it without currying the favour of princelings or others welded to the party-state.” [Sydney Morning Herald]

On Sina Weibo and censorship. “I visited Sina Weibo in Beijing last week, on a trip sponsored by the China-U.S. Exchange Foundation, a Hong Kong-based nonprofit that encourages positive relations between the two countries. Almost alone among the people we met with during our visit, officials at the company weren’t prepared to answer basic inquiries about their policies. They did, however, respond with alacrity to a question about whether their censorship efforts can keep pace with the rising volume of posts, emphatically insisting that they can. As a parting souvenir, they gave the members of my group what must be the perfect symbol of contemporary China: a doll version of their bleary Cyclops mascot, dressed in a People’s Liberation Army uniform.” [Jacob Weisberg, Slate]

A reminder that we should pay attention to the whereabouts of Chen Guangfu: “Chen Guangcheng enlisted all the help he could get. Chen Guangfu, his older brother, was his closest associate. ‘I really admire the brother,’ says professor Jerome Cohen, a veteran Chinese law expert at New York University and long-time friend of Chen’s. ‘He would read law texts to Guangcheng, and sometimes appear in court [in his place].’” [Financial Times]

This is nice. “I want to briefly share several personal experiences. My point is simple. These experiences would be difficult to reconcile with a belief that all (or many) Chinese have strong negative feelings toward foreigners.” [Isidor's Fugue]

Incredible. “‘They are singled out for overwhelming surveillance and by one rights group’s count amount to an estimated one in every 1,000 Chinese – or well over a million. // …Budgeted spending for police, courts, prosecutors and other law enforcement has soared for much of the past decade, surpassing official outlays for the military for the second year in a row this year, to nearly 702 billion yuan, or $110 billion. // Allocated by Beijing to the provinces and on down, the money sometimes is called ‘stability preservation funds’ for the overriding priority the government now puts on control.” [Huffington Post]

“Suspect 1.7.” “Mr. Ai’s ordeal began the morning that police officers drove him from the airport into the countryside. He was marched into a building and pushed into a chair.” [NY Times]

I’ve read one of these reports before. It featured a startling emphasis on gun violence. “In response to the United States’ biased annual country reports on human rights practices released on Thursday, the Information Office of the State Council issued its own report on Friday revealing the true human rights situation in the US. // The report, titled the “Human Rights Record of the United States in 2011″, provides a timely and useful lens for the rest of the world to see the double standards the US uses, and draws attention to the human rights problems in the superpower’s own backyard.” [Xinhua]

A story of a lost — and returned — wallet. [Tea Leaf Nation]