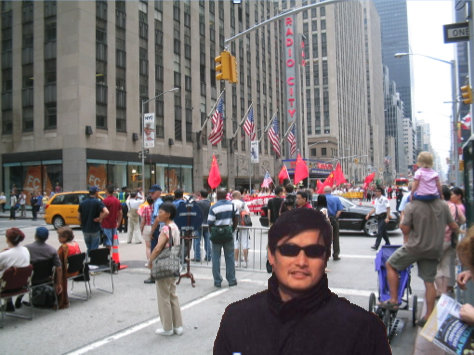 Where is Chen Guangcheng Right Now?

Usually these come on Monday, of course. Sometimes the top of the week gets delayed. Links.

Hu Xijin and other state media bid Chen Guangcheng adieu. “Hu Xijin, the Global Times‘ editor, offered a slightly warmer message for Chen via Sina Weibo, China‘s Twitter-like microblog service, where he wrote that he wished Chen well. He added darkly that he hopes that in the U.S., Chen ‘truly “studies abroad,” in a place so far from the motherland calmly considers what has happened, and understands why he has had so many “lucky encounters.”’ He also expressed his ‘Hope that in a place where it is so easy to be controlled, [Chen] can stand out.’” [Time]

James Fallows weighs in on Yang Rui: “On his Sina Weibo account, Dialogue host Yang Rui let loose with an anti-foreigner rant so extreme that on first reading I was sure it had to be a parody. Only it wasn’t. It’s as if you heard a Stephen Colbert “in character” riff on his show — and then suddenly realized he wasn’t kidding. To put it further in context, it’s as if a well-known figure whose trademark was urbane earnestness — again let’s say Ted Koppel, or Charlie Rose — let rip with a David Duke-style diatribe and evidently meant it.” [The Atlantic]

The economy. “Premier Wen Jiabao seems worried about the economy. Yesterday he urged efforts to maintain growth – Xinhua and his comments made the front page of Monday’s People’s Daily–把稳增长放在更加重要的位置. Some bears are skeptical of the government’s ability to reinvigorate growth, believing that the government gas pedal may be connected through a fuel line with so much leakage that the gas will barely get to the engine now.” [Sinocism]

Wang Lijun to face charges of treason. “If the trial goes ahead as reported, it will serve as a good indication that the outcome of two other connected cases, those of Bo and of his wife Gu Kailai, a murder suspect in the mysterious death of a British businessman, will also be known shortly. // Analysts say the central leadership intends to wrap up the political scandal before an important party congress slated for later this year, as Bo’s downfall has given rise to endless speculation on a split in the top echelon of the Communist Party.” [SCMP via China Digital Times]

What does Chen Guangcheng and Daoism founder Mo Tzu have in common? “As to Daoism, it is easy to see how Chen would be drawn to Zhuangzi and the Daodejing. Both texts value individuals at the margins of society: the weak, the poor, the disabled.  They also put forth powerful critiques of the powerful and the rich.” [The Useless Tree]

Boyce’s intro to his “Beijing Bar Hall of Fame” goes on like this for a while. “What if Frank Siegel never changed jobs and opened Frank’s Place? What if Henry Li had never moved to Beijing and started spots such as Vogue and Neo Lounge? What if George Zhou and Echo Sun had not left First Cafe and stuck to quality cocktails, in a town then largely focused on quantity, when they opened Midnight Cafe and then Q Bar? What if Kris Ryan, Nick Ma and company had…” [Beijing Boyce]

Edison Chen, who enjoys making sex tapes, involved in Sanlitun fight. “Hong Kong-based Canadian actor Edison Chen was involved in a confrontation Sunday morning in Sanlitun where his entourage allegedly assaulted a paparazzo, the Legal Mirror reported. // Chen, who has returned to show business after a sex scandal in 2008, was dining in a bar around midnight when his companions became embroiled with a photographer from tabloid agency FX. // Police questioned the assailants but did not detain Chen, who did not join the fight. Chen apologized later and paid the photographer 5,000 yuan ($790) in damages.” [Global Times]

Yahoo to unload its 40 percent stake in Alibaba. [Forbes] 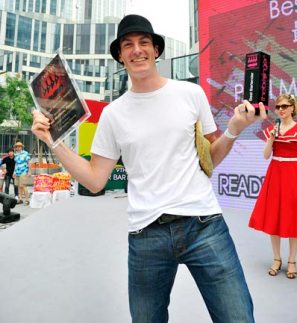 The Beijinger's caption for this picture reads: "Special celebrity appearance by Bez of the Happy Mondays"