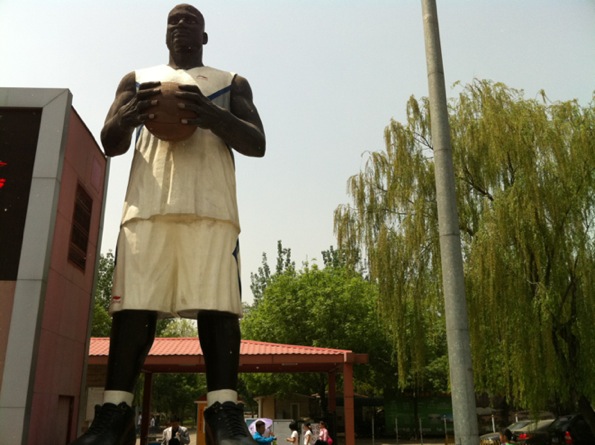 Stephon Marbury may have his own statue, but Shaq is still bigger. There he is, towering over the east gate of Chaoyang Park, and links.

Passed along by RFH, a story worth debating: “Authoritarian states and forms of state capitalism have been achieving rapid bursts of growth since the era of Louis XIV. During the Depression, Hitler, Stalin and Mussolini were all widely hailed by clueless western pundits as having found more ‘modern’ and ‘efficient’ methods of promoting growth than the ‘failed’ policies of the liberal capitalist states. It has been well known for centuries that over the short term, concerted state-guided modernization drives can outperform liberal policies; the trouble is — and always has been — that sooner or later the accumulated inefficiencies, distortions, and political shortcomings of non-liberal states lead to prolonged slowdowns at best, revolutions and wars at the worst.” [Walter Russell Mead, The American Interest]

Melissa Chan takes the high road: “China has a lot going for it, and that is especially felt when you’ve spent so much time talking to the people there. They can be incredibly resilient, despite the fact that some have definitely received the short end of the stick. Like any country, people also worry and complain, and like journalists on any beat, I’ve looked at those worries and complaints. It’s part of the process of making a place I love a better one for its people.” [Al-Jazeera]

Dalai Lama speculates that assassins were near. “Tibet’s spiritual leader told Britain’sSunday Telegraph that sources inside China’s Tibetan regions had told his entourage that fake female devotees might be coming to try to kill him with poisoned scarves and poisoned hair.” [Wall Street Journal]

China’s Good Samaritans deserve better karma. “Doctors in Northeast China’s Heilongjiang province are still working full out to save the life of a young teacher who was run over by a school bus as she pushed two students out of the way on Tuesday. // Zhang Lili, 29, a Chinese language teacher at No 19 Middle School of Jiamusi, remained in an intensive ward on Sunday afternoon after having both of her legs amputated, Xing Jichun, deputy director of the provincial health department, said during a news briefing.” [China Daily]

Maybe tigers weren’t meant to be kept in enclosures? “A Bengal tiger escaped from its enclosure in a wildlife park near the Badaling section of the Great Wall on Saturday morning.” [Global Times]

In which Global Voices uses BJC’s Bo-as-Icarus picture. That’s all I really wanted to point out. [Global Voices]