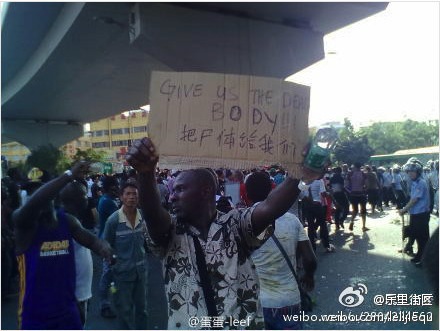 The Chinese blogosphere, specifically Weibo, is abuzz after an incident yesterday involving an African expat, believed to be Nigerian, in Guangzhou. Specifically, he died in police custody. According to Tea Leaf Nation:

One netizen, @GingerYip reports, “According to a black brother at the scene, this morning a black brother got involved in a physical altercation with an electric bike driver over a RMB10 fare (less than US$2). The police took the black brother away. Then they told his family that he died and his family asked for his body. According to the police’s account, the fight happened around 1pm on [the 18th], and the man lost consciousness around 5pm, and he died despite emergency medical attention.”

Police replied, via Sina Weibo, of course, acknowledging the situation and asking for calm. The Nanfang, which broke this story on the English-language blogosphere, adds this detail: “Whatever happened, many in the African community in Guangzhou are upset about it. Crowds gathered around Gongyuan West Road this afternoon to protest, disrupting traffic near the Sanyuanli Police Station. The police called it a protest, but witnesses say the protesters had gone as far as setting fire to a police car.”

According to the Guardian’s Tania Branigan:

In a separate post, the police said immigrants had blocked traffic on Guangyuan West Road – where the fight broke out – on Tuesday afternoon but were dispersed by officers.

They appealed to foreign nationals living in China to “abide by Chinese laws, not harm public interests or disrupt public order” and said police would investigate the death in strict accordance with the law.

We’re not going to know the full truth until days later (or ever?), but it seems like netizens have taken the police’s side on this issue, according to Tea Leaf Nation. “Online sentiments on Chinese social media were overwhelmingly in favor of the police, with many netizens resorting to xenophobic and racist taunts against the estimated 200,000 African migrants living in Guangzhou.”

The dirty little truth no one wants to talk about here is that there is mutual disdain between China and much of Africa, for reasons too complex to get into in this space. This incident will not help relations.

Update, 6/21, 1:02 am: More than 100 Africans participated in the protest on Tuesday (June 19), according to Xinhua. We also have the man’s name: Celestine Elebechi.

Xinhua said the dead African man, whose identity has not been confirmed, “suddenly fell unconscious” at a police station on Monday afternoon “and died after medical efforts failed”, Xinhua said, citing police.

The African man was taken into the police station for questioning on Monday after he had a “physical altercation” with another person, the owner of an electric bicycle who had given the African man a ride as a passenger on Monday afternoon, Xinhua said. Both of them disagreed over payment.

Obviously that’s not a lot of information, and we’d do well to remember that the source here is Xinhua.

Also, Global Times felt the need to publish this just 40 minutes ago:

The city of Guangzhou has seen an increasing number of foreigners in recent years. Official statistics show that there are currently over 20,000 Africans in Guangzhou, however, some scholars believe this number is a conservative estimate, considering the number of unidentified immigrants. They pointed out that Africans in Guangzhou could total 200,000 and increase by 30 percent to 40 percent every year.

The boom in the number of foreigners symbolizes Guangzhou’s internationalization, but it also challenges the city’s management.

As China’s fast development is attracting more foreigners into the country, disputes between different races, common in immigrant countries, are likely to occur in China. This phenomenon used to be a faraway idea for Chinese police, but now it may become increasingly frequent. Conflicts between different racial groups can generate other social problems as well. In the worst case scenario, anti-immigrant feelings can trigger large scale social tensions, as witnessed in many European countries now.