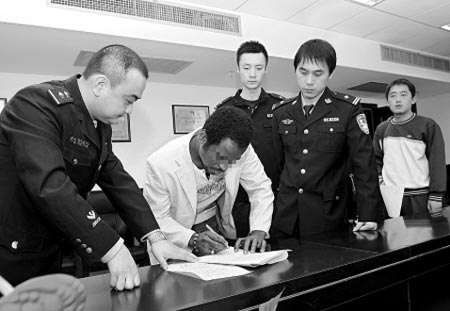 Who's the cat that won't cop out when there's danger all about mainland China?

The 100 Days campaign has been providing many freelancers the opportunity to convince editors back home that there’s some kind of slash ’n’ burn bender going on.

A lot of these articles have been boilerplate mush, oozing from the chin of the great China news aggregator, but one particular piece about alleged racism at a newspaper, posted on Foreign Policy, stuck out like a bad article on Foreign Policy. But rather than unleash the hound, I asked around and confirmed my initialhunch, then waited for the dust to settle. I’m glad I did.

First, the piece: it was posted without comment by editor Isaac Stone Fish and attributed to freelance writer Eva Cohen under the title “Racism in Chinese state media.” The unusually short “guest post” starts off with uncontroversial anecdotes about casual discrimination towards Africans in China, viz:

The only person I know who lost their job since the crackdown began last month is an African-American teacher in Beijing. He said in China professionally it is difficult for him because of his color. Another African-American in Beijing said he has given up on taking cabs entirely because they hardly ever will stop for him.

Nothing too off the mark here, though to add a little dimension, some of this racism is simply snobbery: most Chinese are not so much racist towards Africans per se, more that they regard Africa as inferior economically, and that’s part of a widespread, lamentable embrace of materialism. There are also plenty of talented African-Americans doing well here, who don’t have to resort to the (admittedly twisted) world of English-teacher acceptance.

I had been working for state-run newspaper The Global Times for four and a half weeks as a copy-editor.  Two weeks ago, a European colleague had written an article about the visa situation, quoting foreigners from East Asia, North America and Europe. When the page came to me to copy edit, the top half of the page had a huge photo of Africans standing sullenly in a line-up as a Chinese officer scrutinized one of their passports. The message from the photo: there might be a crackdown on all foreigners, but we particularly don’t want black people. I said that the photo needed to be changed.

Good call, Ms. Cohen, but the real question, surely, is: cock-up or conspiracy? And here’s where the spine of Cohen’s piece dissolves into a fat pool of self-serving twaddle:

The Chinese editor in charge said the graphic designer does not like to change things, and although she seemed to recognize the photo was racist, she said it could not be changed. Several hours later, the photo was still on the page… I said I wouldn’t look at the page anymore unless the photo was changed. She said, “But it’s your job.” To which I responded: “If it’s my job to be racist, then I guess I won’t have a job anymore.”

Then she was like “fine” and I was like “whatevs.” But the message from the piece: Global Times is institutionally racist. When brave staff try and call them on it, they are rebuffed by a hostile system in cahoots to resist any foreigner meddling with the company line.

So I did some checking, and here’s what I found: this was, as one GT staffer wrote back, “some bullshit.” The head designer simply “picked a stock photo with unfortunate implications. [Redacted], [redacted] and Eva all pointed it out (though only with Eva throwing a hissy-fit about it), and it got changed before publication.”

I asked another newsroom writer there, who told me Cohen, a recent American hire, had warned him, “I have a habit of speaking my mind. I can’t not do it. I don’t know how well that will go down here, but I’m not changing.”

As anyone who’s worked in a Chinese-run office will tell you, getting things done and being confrontational about it are usually two opposite and opposing actions. In this tale from the state media coalface, a poor pick of stock photo by a testy designer, who skimmed the story (and who’s a Filipino, by the way), led to an unnecessarily big “hissy fit,” which escalated the issue into a tense stalemate. After the problem went home, cooler heads quickly prevailed. Cohen:

Luckily after I left for the day, more senior foreign staff saw to it that the photo was changed.

How about that? The kicker:

The next day, I was called into the office of deputy managing editor Li Hongwei, and he fired me, allegedly for “not having passed my probation period.” I mentioned the photo but he didn’t respond.

So the story concludes with a serious nod-wink implication: that Cohen was fired simply for doing the right thing. It sounds almost like Mississippi Burning up in GT Towers, right? “Didn’t have anything to do with her firing,” scoffed a reliable editor close to the action. An independent writer confirmed her sacking “had been on the cards for days because a) she was fucking incompetent – as in, [redacted] was re-editing her pages, b) the Chinese staff hated her, c) [personal remark redacted for reasons of privacy] and d) [unsubstantiated professional fact redacted to prevent Eva Cohen from not finding work in any media again].”

We don’t want to throw Eva Cohen under a bus. In fact, I asked Mr. Stone-Fish about the story; he politely declined to comment, directing me instead to an update on the FP site ­– a rebuttal from Mr. Li himself. And let’s just say Mr. Li very much does want to throw Cohen under a bus; preferably a slow-moving one.

So I’m glad I waited. It was the appropriate response, and the matter seems settled. But I think there’s a lesson here about confirmation bias when it comes to anything involving China (and disgruntled former employees).

The essential facts – there was some resistance to changing the photo, Cohen was then released from the newspaper’s employ – are not in dispute. But looking at them from a calmer viewpoint suggests merely a tale of mismanaged incompetence, albeit edited under a provocative “racism” headline. Western titles often rightly try to hold Chinese media to their own standards, but in this case, maybe some skepticism should have been applied.