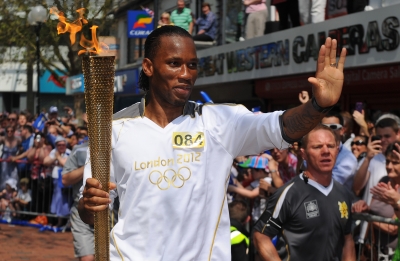 Shanghai FC Shenhua has a problem with prima donnas, specifically one Nicolas Anelka, currently the highest paid player in the Chinese Super League. Last month, according to the Telegraph, he threatened to quit the team, whining, “If there is still no one to support me and (they) continue to play little tricks behind my back… then I will quickly decide whether or not to retire.” A little earlier, according to Wild East Football, Anelka said at a press conference, “In my opinion, the most important area in football is the midfield, if Drogba comes, and no-one can pass to him, then that is no use.” He spared no potshots for his current teammates: “They are too young and their experience is not enough. Our tactical problems need to be solved, these are the reasons why we are not scoring goals… I’m amazed by Chinese football, there is quite a gap with the European game, such things can only be improved through better training.”

Things aren’t likely to get less dramatic now that Shenhua is expected to ink Drogba to a contract that will make him the new highest paid player in the CSL. (That won’t make things awkward with Le Sulk, not at all.) But the signing process has been… frustrating. According to ESPN:

Shanghai Shenhua owner Zhu Jun is confident that Chelsea striker Didier Drogba will announce his arrival at the Chinese club in the coming days.

“You should ask this question to Drogba’s management,” Zhu Jun told reporters asking when the announcement would come. “We have put in great effort for nearly half a year and particularly last week, when we met with his management team to reach a unanimous agreement on some crucial points.

“As of this morning, things are developing in the right direction, but I don’t know if Drogba will announce he is joining us today. Right now, I really don’t know. Maybe I can give you all an answer tomorrow, maybe we need to wait a few more days. Who knows?”

Well, that’s good. Who knows? Let us all wait, like the boss himself — the man who will be paying this 34-year-old, on-the-decline player a reported 888,000 RMB per week.

But… what are we waiting for, exactly?

The video game magnate who runs the free-spending football club is just waiting for Drogba to announce his future via his personal official website.

This website. When the day comes, there better be sprinkles, flash explosions, and, like, twenty pop-up ads for free ice cream and mp3 downloads. Otherwise, Shanghai fans and management will have been held hostage to the whims of a star football player’s personal website webmaster. 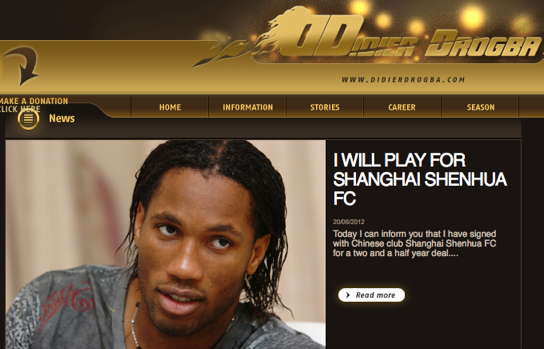 One month after sealing Chelsea’s victory in the European Champions League final, Didier Drogba signed with Shanghai Shenhua on a two-year contract that will reportedly make him China’s highest-paid player.

Shanghai confirmed the signing on Wednesday, and Drogba said on his website he will join the Chinese Super League team in the country’s financial hub next month.

No details were given on Shanghai’s offer, although local media reported the club was willing to pay as much as $15 million per year.