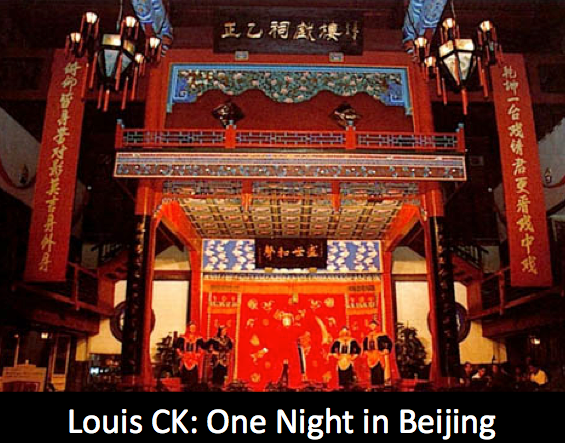 There was a “no picture” policy at this theater last night.

Louis CK played a show in Beijing last night; he spoke for just over an hour. Here’s what we can’t talk about – the organizers. Even though they were in season and up on stage last night, handing out the shout-outs like skittles, after midnight, they became as shy as hedgehogs and asked us not to even mention their names.

Here’s what we can talk about: Louis CK. Which is why you’re here anyway. I considered filming some of the show for you but then I remembered what kind of prick does that, so I’ll try to paint a picture. The show was at Zhengyici Peking Opera Theater, which despite being the oldest wooden theater in China, no one seems to have heard of: not taxi drivers, not any of the four dozen locals we asked, not even Google Maps (which offered us two separate theaters, both called that). We chose one to follow on the GPS and got lucky – even though we canceled our Peking duck to arrive on time and found the show instead delayed an hour, the entrance overrun with boozing expats getting the party started.

After much sweat was shed, drinks spilled and fists bumped, Pink Floyd came on. No, wait. Louis strolled up the steps amid great applause and excitement, which continued throughout, with sporadic attendant cries of “Whoo!” Eventually even he got tired of this, and asked people to knock if off: “I don’t deserve it.” But you can’t keep a good douchebag down in Beijing and it never really stopped. Woot! You see? I guess some people cannot get over the fact that a profane and amusing US comedian is actually performing in the world’s largest authoritarian state.

Of course, though, China is changing, as Louis kept remarking: “We [Americans] think you’re all peddling bicycles, wearing little hats… it’s nothing like what we think.” But “I keep seeing this guy: [flips up shirt to reveal proud potbelly].”

That and his recollection of urinating next to a squatting iPhone user in a public bathroom got the biggest early laughs of recognition from the crowd, mostly because we were largely white (Louis: “there are only two black guys in Beijing and I’ve met them both”). Also, the crowd comprised every expat you’ve ever met here, though from his material, it seemed like Louis was expecting to play to more locals as opposed to wooting Americans.

Anyway, after a couple of riffs on the food, the show moved to more familiar (if mostly new) territory – the mores of children, masculinity anxieties and dick transplants. Although not everything flew — a piece about how bad men really are compared to women, in terms of worldwide murdering, raping and looting statistics, came close to simply stating a given — other lines killed. Example: “I’m jealous of gay guys because they don’t have to worry about other people thinking they’re gay.”

Louis has an intense and healthy distaste for pop-moron culture — on fancy electronics: “You don’t ‘deserve the best.’ What are you, the King of Siam? ‘I want that one.’ Just pick any one… they’re all built on Asian suffering!” – but he normally pulls back when things get a little dark, stopping then to grin reflexively, “I can’t believe I’ve been using that in New York for weeks and now I’m doing it here in China,” rather than eagerly burrow further down the rabbit hole like, say, Bill Hicks would have done.

But Louis still finished on a wonderfully sick note, pondering why old rich guys haven’t started getting penis transplants yet: “And I’m not talking about some transsexual shit, grafting your elbow skin… I’m talking about a dead kid’s dick. Some baseball player from Brazil gets hit by a truck and a day later, I’ve got his beautiful dick on my body.”

Then it was over, bar the usual scramble for any kind of ride home from Qianmen. We saw Louis riding back a small boy in a paddy hat – it looks like he really managed to get into Asian culture on his short visit. Sadly, we had to settle for a taxi. This short, sweet event was probably the most unlikely and enjoyable any foreigner’s had in Beijing for a while. And for that we have to gratefully thank [redacted].

Ed’s note: We would like to assure Louis CK’s lawyers that we have no idea how Louis really got home.