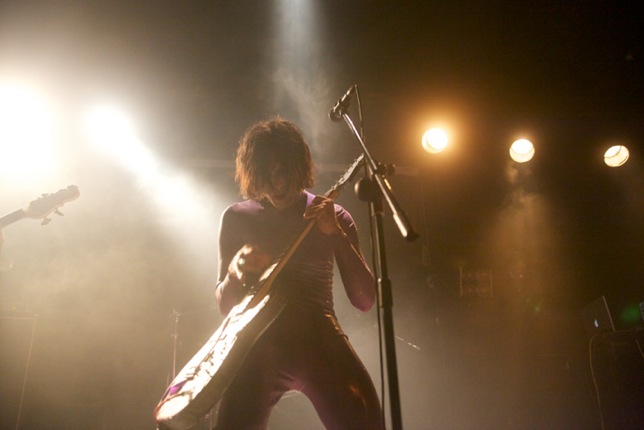 Friday night’s show at MAO Livehouse featured an Italian band called The Medullary Paralysis. I could write a lot about the experience, but I think a quick summary of facts will tell you everything you need to know:

1. Half the songs sounded like a lost Nine Inch Nails album I never realized existed. The other half sounded like a halfway decent impersonation of the Smashing Pumpkins.

2. The band wore purple latex outfits that had them perspiring so profusely, their boots filled up with sweat.

3. They wore black and white face makeup that would do Robert Smith proud.

4. Their band manifesto is, “We Don’t Drink, We Don’t Take Drugs, We Don’t Have Sex, We Feel Compassion.”

If this summary has you intrigued, then you probably would have enjoyed their show. If the band strikes you as especially weird, and the last time you listened to NIN was when you were beating the crap out of that emo kid in high school and accidentally heard Hole In The Head pouring out of his earphones, then I can safely say you would have absolutely hated the experience.

I personally felt bad for them, in the way I often do when foreign acts get flown all the way to Beijing only to play in front of 25 people, mostly expats. I could never tell whether the trio was in earnest or just trying to create a niche for themselves with their weird stage presence and life choices. Either way, they were enthusiastic and possessed a great deal of showmanship. If I were an emo kid used to getting beat up next to my locker, I’d definitely be a fan.

One final note. If you are a show promoter in Beijing and want to fill up your venue, book these guys:

I don’t know who they were, but they opened for The Medullary Paralysis, and the crowd loved them.

2 Responses to “The Medullary Paralysis In Beijing”