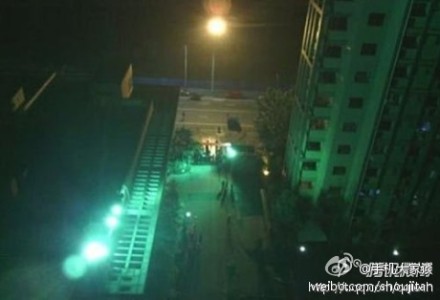 The supposed "riot" at Foxconn... heard around the offices of shitty journalists everywhere

Eric Fish of Sinostand basically said all I wanted to in his post earlier today, “Foxconn: A Very Quiet Riot“:

Over the past day or so several foreign media outlets including Huffington Post, Business Insider and Bloomberg TV have been reporting that dozens of workers at a Foxconn factory in Chengdu were arrested after clashing with security at a dormitory. Some said that “workers with a grudge against the security guards prevented them from catching a thief. Soon up to 1,000 workers were ‘throwing trash bins, chairs, pots, bottles and fireworks from the upper floor of the building and destroying public facilities.’”

These outlets cited a single source: Want China Times – a Taiwanese agency which routinely prints stories based on single, unreliable sources (here, here and here, for instance). In this case, WCT cited Molihua – a democracy and human rights advocacy group.

But we would like to point out that Huffington Post, Business Insider and Bloomberg TV varied in their degrees of shittiness. The winner?

Narrowly, Bloomberg TV, which used a picture from last year to illustrate its point. Isn’t that called “doctoring”? Isn’t that the preferred device of propagandists from here to there, the world over?

We often fixate on Chinese media’s “propaganda” because their bias seems so obvious. Well, at least they’re somewhat forthright about it. A softer, more difficult to detect type of propaganda — which people prefer to label “bias” — is alive and well in the US, too, and it’s exemplified by journalists who are simply too willing to believe a story because they’ve been weaned on the “China Narrative.” Heard a whisper about a Foxconn riot? And it involves 1,000 people, you say? Must be true! Let’s throw on a splashy headline and link to a bunch of our own back stories about Foxconn being bad! Who needs fact-checking? Who will ever call us out on our shit? Who needs to contact Foxconn? It’s not like anyone can get in touch with them…

I got in touch with Foxconn Technology Group and they sent this press release:

We were informed by local law enforcement authorities that late Monday night, several employees of our facility in Chengdu had a disagreement with the owner of a restaurant located in that city. We were also informed that the employees subsequently returned to their off-campus residence, owned and managed by third-party companies, at which time a number of other residents also became involved in the disagreement and local police were called to the scene to restore order. Foxconn is cooperating with local law enforcement authorities on their investigation into this incident.

That’s Eric Fish again, who adds, “It’s too early to say definitively that the original Want China Times report (and all those that based their reports entirely on it) were completely wrong, but I think it is safe to say they jumped the gun.”

Oh the way, we’re still waiting for your correction, Bloomberg.