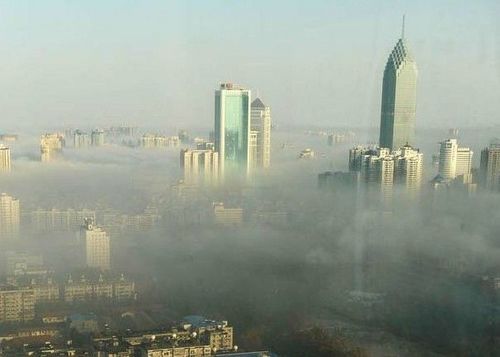 “The Great Fog of Wuhan”; smog? (image via NBD.com); blamed on straw-burning. [Xinhua]

It’s been a slow Monday. We’ll pick it up for the nighttime. Here’re your Monday links.

I’m reminded of Bjork’s lyric: “All walls are great if the roof doesn’t fall.” “City officials told the state news agency Xinhua that the four parts of the wall currently open to the public are overcrowded on weekends and holidays. // Tourists have reportedly responded by scaling the walls of the closed sections, damaging their structure. // The authorities will now open the Huanghuacheng and Hefangkou areas.” [BBC]

People in Hong Kong protest for Li Wangwang death probe. “Thousands of protesters demanding an investigation into the death of Tiananmen dissident Li Wangyang marched on the central government’s liaison office yesterday. // The demonstration took place as authorities in the activist’s home city gave the first official account of how he died, saying his body was cremated ‘at the request of relatives.’” [SCMP]

Aren’t these guys just potentially setting up the government? Hmm? “In the wake of the mysterious death of Tiananmen dissident Li Wangyang just two days after the 23rd anniversary of the crackdown of the 1989 student protests, Chinese activists and dissidents have rushed to make online declarations that they would not be committing suicide anytime soon.” [Shanghaiist]

Pretty messed up. “Three babies who were being carried by their mothers in a supermarket had their feet sliced with a razor, according to Guangzhou Local Television.” [The Nanfang]

China as kleptocracy. Discuss. “I start this analysis with China being a kleptocracy – a country ruled by thieves. That is a bold assertion – but I am going to have to assert it. People I know deep in the weeds (that is people who have to deal with the PRC and the children of the PRC elite) accept it…. // Unless the Chinese can get the inflation rate up expect a revolution.” [Bronte Capital]

Student learns, at test’s end, that his mom died during gaokao. [chinaSMACK]

Please heed the lesson of Green Island Stadium. “Changsha, in China’s Hunan province, will be home to world’s tallest building in just 7 months, if a report in local newspaper Sanxiangdushibao is to be believed.” [Morning Whistle]

And introducing… This 1510 Digest, via Danwei.