Three views to an accident.

This past Friday, we told you about a police car utterly demolished under the wheels of a tourism bus in Beijing, and reported that there was one fatality. Apologies for being late with this update, but according to China Daily via Sina, published Saturday:

The officer who was killed worked in the Beijing Municipal Public Security Bureau’s Chaoyang district bureau and was performing his duties when the accident happened, according to a post on the police bureau’s official micro blog on Friday evening.

The post said the bus driver has been detained by the police, without disclosing why he had failed to stop the bus before the crash or exactly what the officer was doing when the accident occurred.

According to a statement Shouqi Group put on its website on Friday night, the bus was carrying 30 security volunteers from the Chaoyang branch of the Beijing police bureau. They were going to a holiday resort named Xiedao near the North Fourth Ring Road to undergo training and the police car was leading them there.

The statement said the passengers and driver aboard the bus are safe and the cause of the accident is under investigation.

This Dongfang News report says the bus was going at 50 kilometers per hour.

China Daily also reported that there was a video taken from inside the bus of people breaking the glass to escape, but I can’t seem to find it. Perhaps it was taken down — there were, after all, reports of some censorship going on, at least on Sina Weibo.

All further updates will appear in this space.

The above compilation was put together from Youku videos here, here and here. 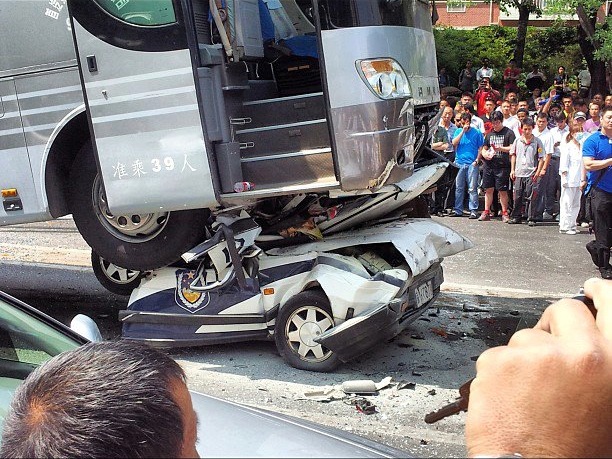 One Response to “Update To That Bus-Crushing-Police-Car Story”