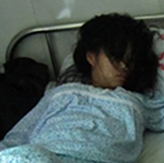 Understated as always, Xinhua reports that the city government that employed the officials who were responsible for forcing 27-year-old Feng Jianmei to abort after seven months have “apologized.” In person, I wonder? Via email? Text message? Fucking assholes.

The city government of Ankang on Thursday evening apologized to a woman who underwent a forced abortion at a hospital in northwest China’s Shanxi Province, adding that officials who have been found to be responsible for the incident will be relieved of their duties.

OK, stop. Stop this fucking charade right here. Adding that officials will be “relieved of their duties”? The fuck? This is something that really had to be appended as a dependent clause? Shouldn’t it be: “Officials guilty of forcibly aborting a woman by injecting poison into her belly have been charged with…”?

Also, am I correct in reading this? The city government is apologizing, not the officials themselves?

Moving on before anger overwhelms me and I fashion a shape poem out of curse words.

According to a preliminary investigation, several government officials in Zhenping county, which is administered by Ankang, were found to have violated national and provincial policies and regulations, the city government said.

In the very last sentence of the article, we learn about those “national and provincial policies and regulations”:

However, Feng’s abortion took place late in her pregnancy, a practice that is prohibited by China’s laws on population and family planning.

Laws on population and family planning. Not, like, laws on how to treat human beings. In other places, we just call those “laws.” Common decency, really, like knowing that killing a woman’s unborn child and then placing that child next to her in bed (graphic) is a really, supremely dick thing to do.

In the middle of the article, we’re treated to our usual dose of Xinhua balderdash, such as:

The government apologized to Feng Jianmei and her family members, saying it will accept supervision from society and cope with the case in accordance with law.

Supervision from society? Cope with the case? Like, how someone might treat gonorrhea with an antibiotic? I’m confused.

The Shaanxi Provincial Population and Family Planning Commission, which oversees family planning in the province, announced Thursday that it has dispatched an investigatory team to Zhenping and ordered the local government to punish any officials who are found to be responsible for the forced abortion.

Forgive me for being like this. It’s just that I don’t buy the argument that we should consider this “apology” or this “coverage by Xinhua” as a “victory.” So the central government gives a fuck, eh? Why shouldn’t they? Some rube out in the boondocks is caught being a squalling fuckhead, and the country’s top squawkbox is somehow supposed to stay silent? How low are our standards, anyway, that a woman can be forced to abort at seven months and we’re satisfied by just an apology and job loss?

Reality or not, that’s the perception, and that’s a problem for both Xinhua and China. You might say it’s unfair, since the government in Beijing — indeed, most people – had nothing to do with this crime. But until a real punishment — actual justice — is levied, the blame will continue to rise up.

China Daily Show puts it best, I think: “A county official who forced a young woman to abort her seven-month-old child was today forced to finally give a fuck, after the rest of the country found out about it.” We’ll leave it at that.

POSTSCRIPT: The Associated Press (which rather unfortunately conflates “the government of Ankang city” and “China” in its lead) reports:

The government of Ankang city, where Feng lives in northwest China’s Shaanxi province, said a deputy mayor visited Feng and her husband in the hospital, apologized to them and said officials would be suspended amid an investigation.

“Today, I am here on behalf of the municipal government to see you and express our sincere apology to you. I hope to get your understanding,” Deputy Mayor Du Shouping said, according to a statement on the city government’s website Friday.

Leave it to the shittiest city in the world to use a private apology for the sake of public relations.