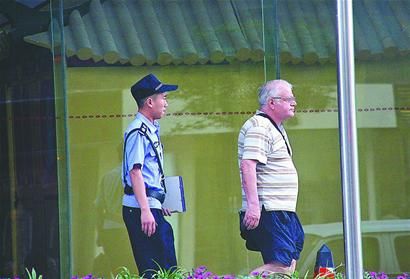 Via Sina, its caption: "A New Zealander is being taken away by police after tossing a young girl into a swimming pool in Jinan, Shandong province, Sunday."

A New Zealand national, believed in his 50s, tossed a 5-year-old Chinese girl into a swimming pool for “her bumping into him” in Jinan, capital city of E China’s Shandong province on July 1, the provincial newspaper Qilu Evening News reported.

That’s from Sina English. Apparently the man (a university lecturer), when confronted by the girl’s appropriately incensed mother, cursed her in English and then tried to start a fight, according to witnesses. Read more if you’d like.

According to Xinhua, the family of the five-year-old girl strong-armed the foreigner, surnamed Phillips, into paying 20,000 yuan as compensation. As translated by Shanghaiist, the girl’s mother, surnamed Tian, said, “[Phillips's wife] cried to us saying her husband was working at the university as a foreign teacher, making a meager monthly salary of just 5,000RMB. He had just had an operation and was short on money. But we refused to retreat — since he was not detained by police, we had to give him some of punishment.”

A spokesperson with the Shandong University of Finance and Economics confirmed that Phillips was an employee and had just had heart surgery in February.

“Because of his health condition, we have revoked his foreign expert’s certificate. We will not be signing a new contract with him after this,” said the spokesman according to the Xinhua report.

UPDATE, 7/5, 12:08 am: Welcome to the pool party, WSJ. Maybe you can tell us how “sentiments against foreigners have been stirred.”