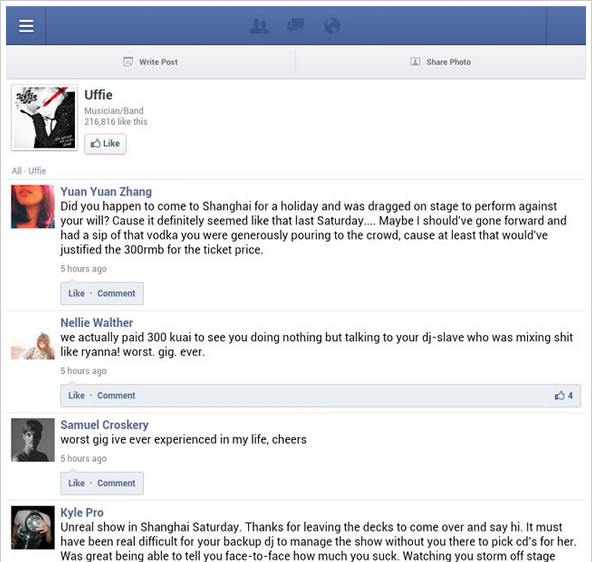 Paris-based electronic musician Uffie (Anna-Catherine Hartle) played in Shanghai’s Mao Livehouse last Saturday, and by all accounts put on one of the most embarrassing shows ever. For 300 yuan, people got to watch her get drunk and stand around, possibly wave her arms, while other DJs played pop and dance music, e.g., Rihanna. It was so bad that the show’s promoters, Four Leaves Productions (who might not be free of blame in this), publicly trashed her afterwards, telling Smart Shanghai, “The whole thing was a total joke.” Meanwhile, Shanghaiist compiled a list of angry complaints on Uffie’s Facebook (since deleted from her account), such as “worst. gig. ever” and “unreal” and “worst gig” and “Worst. Gig. Ever.” Uffie followed up all this with possibly the worst non-apology apology ever (Ever.), which really doesn’t deserve reprinting here, but feel free to check it out.

But what did City Weekend, that lighthouse of expat nightlife, a “reader-powered” promotion, the self-proclaimed “China’s leading English-language lifestyle and entertainment magazine and website,” think of the show?

And though Uffie has certainly played bigger gigs, she didn’t let the small crowd deter her from putting on a good show, as some performers have been known to do in the past. She had great energy on stage, establishing a great rapport with her audience from the second she stepped into the spotlight. All in all, she didn’t disappoint.

(The emphasis is City Weekend’s.)

I was the Mao Livehouse…and reading this review is as embarrassing for the credibility of that website as the show was for Uffie.

You must have been as wasted as that turd if you think people in attendance “rocked out hard to Uffie’s beats well into the night.”

Eventually, CW editors are called out, and more than two days after this mess began, dining editor Geoff Ng appears:

Hey guys, apologies for the delay in response and for this review. Without going into the details, we’ve discovered that mistakes were made and we’ve put processes in place to make sure this type of thing doesn’t happen again. Leila’s left the CW family, best of luck to her in the future.

Ng and CW Shanghai’s nightlife editor both politely declined comment, and the writer (a marketing assistant at The Tandoor, according to her LinkedIn profile), has yet to reply to my morning email. (UPDATE, 4:46 pm: Leila just emailed [before she saw this post, presumably] what was essentially a polite “no comment” and said she’s trying to “move on,” which is understandable.) Perhaps we’ll never know what City Weekend has learned after all this — just that “processes” are in place.

But there is a lesson here, of course: if you’re a magazine editor, muzzle the shiny-happy PR-speak. And broadly speaking, keep marketers quarantined on their side of the metaphorical and literal room. (No offense to marketers out there — you’re just usually noxious to editorial content.) It’s a novel concept at lots of Chinese publications, where marketing and editorial often work in symbiosis to make money for the big boss, but when the public figures out your ruse, the trust you lose will be hard to win back. The Uffie debacle is but one example, blown large, of the consequences of tapping an inexperienced writer — a marketer for an Indian restaurant — to pen a critical review.

Serve the reader, not advertisers. Otherwise, the people will call you out.

UPDATE, 7/23, 1:58 pm: CW editor Geoff Ng emails: “A relatively fair account of what happened, but I feel the ending (‘Serve the reader, not advertisers. Otherwise, the people will call you out.’) muddles the issue. The way it’s phrased makes it sound like we were trying to appease some advertiser, which is simply conjecture on your part. If you’re talking about us appeasing the Uffie promoters, they’ve never bought ads with us to my knowledge. If you’re talking about Tandoor (actually an advertiser), I’m not sure how they’re served by an Uffie review of any type.”