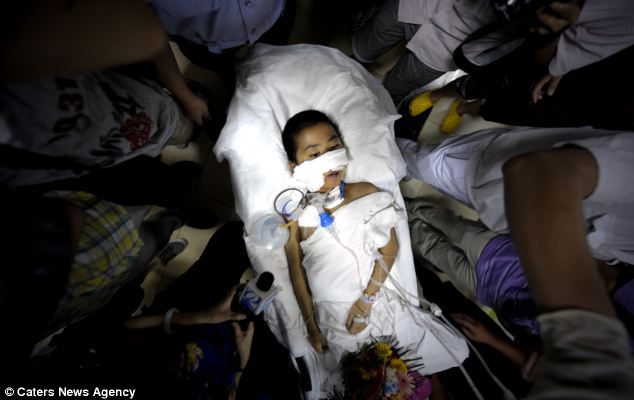 On June 30, two adults at an auto repair shop in Xiajin county, Shandong province pressed a mechanical air pump agains the anus of a 13-year-old boy and nearly inflated him to popping. Literally. The crime was almost too ghastly to comprehend. But comprehend we did, and in the successive days, it was as if society awakened to its own monstrous potential and decided to redeem its collective self by donating to the boy’s father and a charitable foundation called Angel Mom. Reports say Angel Mom received about 280,000 yuan in less than two weeks, while the family has collected 360,000 yuan to date. There was a glimmer of hope for all of us. I remember watching a news feature about the boy’s transfer from Shandong to a Beijing hospital and letting down my cynical guard: a camera crew followed the boy into an ambulance as it zipped down relatively quiet Beijing streets, which, we were told, were cleared by traffic cops in anticipation of Du Chuanwang’s arrival.

Was it all a fucking lie? A despicable manipulation of public opinion? A crime against sympathy on top of that original sadistic attempted manslaughter?

Donations that came in through a special bank account set up by the boy’s father Du Shehou have now been removed from his care by his cousin, who has since taken the bank card back to his hometown in Shandong.

“The [ICBC] bank card is now with my cousin, Dong Qilu,” said Du Shehou to Southern Metropolis Daily. “I have asked him to return me the card but to no avail. He said he was going to take the card back home.”

“He’s controlling my daily expenditure here, and said I can’t spend more than 100RMB each day. He said this money is from the society and that we have to use it more sparingly.”

Reporters contacted Dong Qilu, who said “he and other relatives have decided to help ‘safekeep’ the card because they were concerned that the boy’s father would not use the money wisely. He did not give an answer when further pressed on why he needed to ‘safekeep’ the card, saying only that the family would be ‘above board’ in all financial dealings and that the card would be returned to Du ‘soon.’”

One will try to not assume the worst — that Dong Qilu is a blackguard who has no qualms stealing 360,000 yuan from the public, his brother, and his critically injured nephew — but it gets pretty damn hard to keep cynicism in check when you read on:

With lingering public mistrust of official charity organisations, cynical internet users have asked pointed questions about the overall handling of the boy’s case, and the selection of the Beijing Bayi Children’s Hospital.

The motivations of Wang Xi, host of Qilu Television’s Daily News show who followed the boy from Shandong all the way to Beijing (we briefly mentioned her here), have also come under great scrutiny. Wang has since suspended her Weibo account without giving a proper account of how she came to be involved in the case.

Did Bayi Children’s Hospital pay off the Shandong hospital to receive the boy as a publicity grab? Was Wang Xi the middleman? Was the entire transfer an unnecessary public relations stunt, jeopardizing the boy’s life by possibly exposing him to gross infections that now threaten his recovery?

I blanch at the thought of the adverse effects this case might have to “national morals.” The way the government would have it, moral action is a matter of right and wrong, to be praised when right, condemned when wrong. For nearly two weeks, the media has been condemning those who hurt Du Chuanwang and praising those who have aided in his recovery. But in this construct, is there room for middle ground, where the rest of humanity — those who don’t write for state-sponsored mouthpieces — reside? Let us pretend, for a moment, that the world is indeed filled with individual actors who do good or bad things, inspired by greed or generosity. Now: why should anyone ever trust anyone else, for in such a Manichean construct, does it not warrant that my charity will be automatically countervailed by your avarice?

You don’t want to overthink like that, of course. But the simpler and harder question, in light of cases like that of Du Chuanwang — meaning the people around Du Chuanwang who insist on keeping him in the spotlight so they can continue operating in the shadows and the fringes of good conscience — is how do we trust? Perhaps by convincing ourselves that to be duped is a worthy risk.

Is it usually? More pertinent to the case at hand — is Du Chuanwang worth it? A horrible question, I know: it’s a lot of pressure to put on a 13-year-old boy. Yet as soon as he’s able to talk, I can almost guarantee you the cameras and journalists will be by his bedside asking him to comment on the public’s outpouring of goodwill. What does he think? What does he want to express, from his heart? And viewers will all silently — or publicly — judge him for the answer he supplies, as we’ll finally know: was he worth it?

It’s a damn shame that the society we live in forces us to make such a consideration.

7 Responses to “Remember Du Chuanwang, The Boy Who Inspired A Public Outpouring Of Goodwill? This Latest Update Is Sickening”