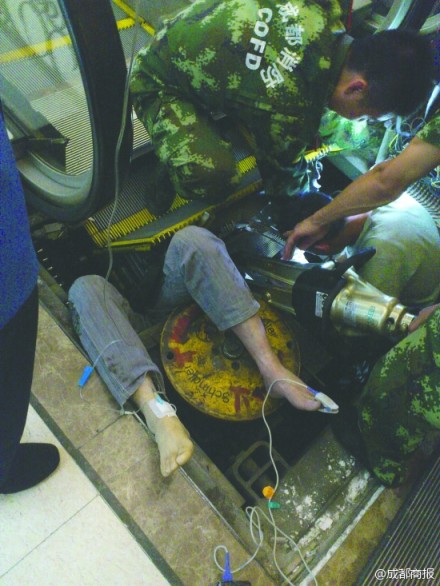 Yesterday, a man died after getting stuck inside an escalator. You read that right. Escalator.

This happened at a craft store in Chengdu. A maintenance man surnamed Zhang, 49, was called in to fix an escalator, made by Schindler Elevator Corporation, and to do so, he had to lift up a panel near the top of the moving stairway to reach a lever that would start up the machine. Somehow, though, he fell head-first into the contraption, according to Sichuan Online – Huaxi City Paper. The escalator suddenly roared to life, sucking the man farther into its steel mandible.

Firefighters were called in. They used hydraulic tools to remove two steel plates, and slowly worked to open up space. The man’s legs twitched, but it was apparent he was becoming weaker. By all accounts, it was a strenuous and dramatic operation.

Finally, about two hours after the man first got stuck, he was pulled out. Blood was oozing through his white shirt, both his eyes were shut tight, and he was unresponsive. “He still has a faint heartbeat, let’s try again,” a doctor at the scene said, according to Huaxi City Paper. When they took off his shirt, the damage was apparent: his chest was “mutilated.” After 45 minutes, the doctor shook his head. The cause of death was determined to be internal bleeding and organ damage.

The above-linked website has provided us with a diagram for how the accident occurred: 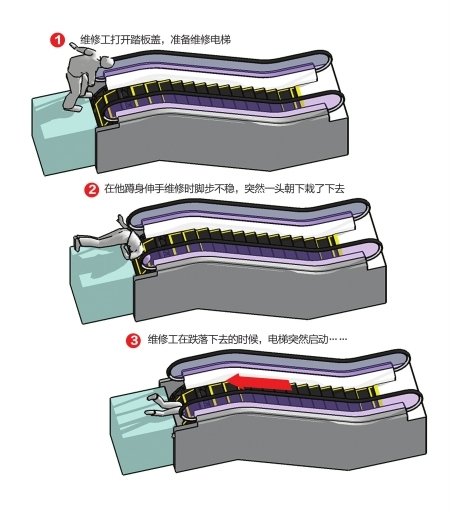 No, it doesn’t make a whole lot of sense. Neither does the thought of escalators swallowing repairmen and slowly draining the life out of them, though.

5 Responses to “Escalators In China Are Now Eating People”