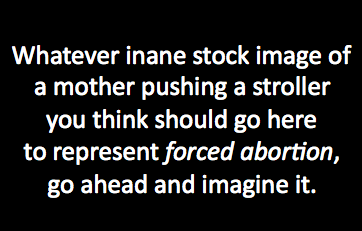 Feng Jianmei, who was forcibly aborted last month, and her husband Deng Jiyuan, who went missing for a while but has since resurfaced, have signed a settlement with their local government, reports Xinhua:

The family of a young Chinese woman forced to have a late-term abortion has agreed to settle the case out of court after local government offered a compensation of about 70,000 yuan (11,023 U.S. dollars), officials said Wednesday.

…Beijing-based lawyer Zhang Kai, who represents the Deng family, told Xinhua that as the agreement was signed, the family dropped a lawsuit seeking state compensation in court.

“The signing of the agreement means neither party should raise any question related to the issue again,” said an official who declined to be named. “The money has been paid.”

So that’s that. We shall never talk about this again. NEVER. EVER.

Another victim of a forced abortion during late-term pregnancy – conducted because of the mainland’s one-child policy – is seeking redress through the courts.

Beijing lawyer Xu Can said yesterday he was representing Wu Liangjie, 30, from Daji town in Fujian province , whose wife, Pan Chunyan, also 30, was forcibly given an injection in April that killed her unborn son.

Xu also said a letter would be sent soon to the Xianyou county government, which administers Daji town, demanding that officials investigate the criminal acts of those involved in the abortion. He also said the letter would demand compensation for Wu’s family for damages and mental distress.

Goddamnit, South China Morning Post, always ruining everything with your reportage. (Actually, that article is behind a paywall, so consult Radio Free Asia instead.)

One Response to “Forced Abortion Update: It’s All Settled, Apparently”