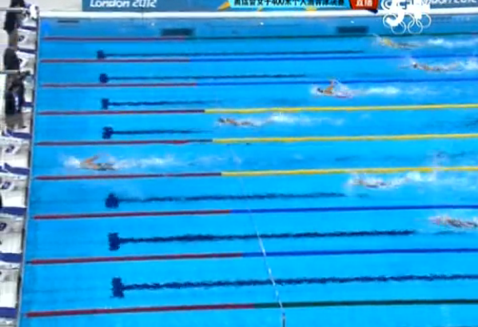 UPDATE, 6:19 pm: The Ku6 video has been pulled, but you can watch the full race on Sina here if you’re within mainland China (they don’t allow embedding).

All eyes will be on Ye Shiwen tonight (8:43 pm London, 3:43 am Beijing) when she competes in the 200-meter individual medley (she set an Olympic record in her preliminary heat). If she’s anywhere close to the lead in the final turn, the competition is, as we say, over, because no one is in her league in the freestyle.

Before that happens though, let us relive her swim in the 400 IM, which has come under scrutiny after an American coach accused her of being too good to have not cheated.

A second quote from Ye has surfaced, a much cleaner denial than her first quote (included in the above link). Canada’s National Post reports that Ye told reporters: “My results come from hard work and training and I would never used any banned drugs. The Chinese people have clean hands.”

And according to The New Zealand Herald:

“There is no doping, the Chinese team has always had a firm anti-doping policy,” she said.

Ye believes she can go even faster.

“I feel like I still have room to improve my stroke,” she told China Daily.

“I’ve strengthened my backstroke and butterfly, so I am getting better at the start. But I am still young and have some more potential in my body.

“I dreamed of winning the gold medal, but I never ever expected to break the record. So I am overwhelmed,” she said.

I think the above will play for those in North America, though you may need to pause to let it buffer.

2 Responses to “Here, Again, Is Ye Shiwen’s Controversial Swim In The 400-Meter Medley”