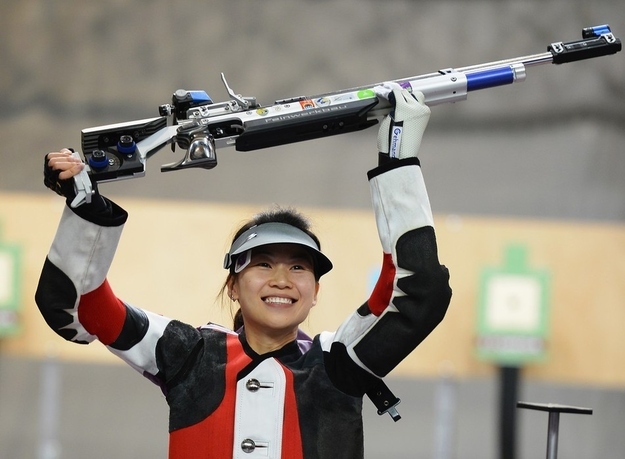 In the opening women’s basketball game, China, ranked 7th in FIBA, upset world runner-up Czech Republic, ranked 4th, 66-57. No other team in China’s pool, other than the US, is in FIBA’s top 20, for whatever that’s worth — though Croatia gave the US a close game for three quarters. Second place is within grasp for Team China.

Here is Yi Siling, via Buzzfeed, who won the first gold medal of the Games when she came from behind to beat Poland’s Sylwia Bogacka in the 10-meter air rifle:

Sun Yang may be receiving congratulatory texts from Dwyane Wade, but Ye Shiwen, reportedly only 16, made one hell of a swim, too. Reports NY Times: “Then, 16-year-old Ye Shiwen smashed the world record in the women’s 400 individual medley by more than a second: all the more remarkable because she swam the last 50 meters in a faster time than the new men’s 400 I.M. champion, Ryan Lochte, swam his last 50 meters.” She set a world record of 4 minutes, 28.43 seconds despite swimming in a textile suit, unlike the polyester suit worn by the previous record holder.

Yi Jianlian is going to have a monster Olympics and be swooped up by an NBA team. China’s men’s basketball team lost 97-81 in its opener to Spain, but there were several positives to be gleaned from the contest. Chen Jianghua and Wang Shipeng, both guards with the Guangdong Southern Tigers, had performances that stuck out for me, and China’s star, Yi Jianlian, registered a monster 30-point, 12-rebound effort. Spain is the prohibitive favorite in Pool B, so the games are expected to get a little easier from here — but not by much, in the case of the Brazil, Russia, Great Britain, and Australia games. That’s all the rest of the games, actually.

Diving dream team wins again. Reports BBC: “China continued their domination of Olympic diving as world champions Wu Minxia and He Zi easily won the women’s synchronised 3m springboard event. // The nation won all eight events at last year’s world championships and are expected to do the same in London. // Wu and He scored 346.20 to secure Wu her third successive Olympic title, with the United States taking silver and Canada edging Italy for bronze.”

South Korea edges China 210-209 in women’s team archery. No shame losing to South Korea, which has won seven consecutive gold medals in this event. Congratulations to them.

The Olympics rolls on. Stay tuned.