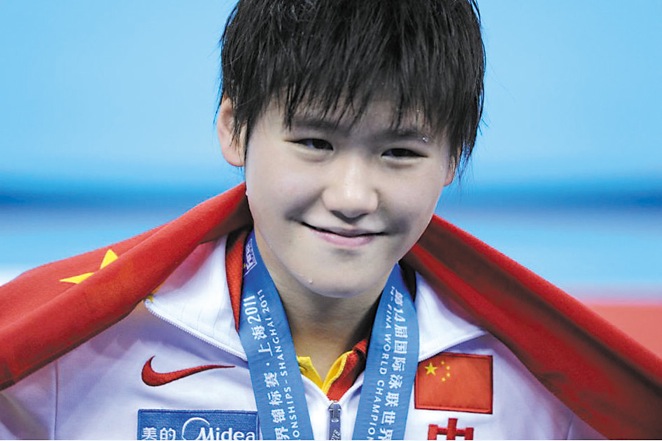 We’re at the point where Ye Shiwen can no longer be found guilty in China, if that makes sense. This issue has become about more than swimming. If it ever does come to light that Ye used a banned substance, I suspect the relevant organs will find a scapegoat who admits that he accidentally put an illegal substance in her food or something, and no one — not the media, the Chinese swim officials, the millions on Weibo — will have to lose face.

It’s unfortunate we’ve reached this point. How did we get here? How did an off the cuff statement by the BBC’s Clare Balding — “How many questions will there be, Mark, about somebody who can suddenly swim so much faster than she has ever swum before?” — lead to Chinese netizens turning this into a nationalistic us vs. them issue?

There’s no good answer, of course, except that this always happens. And it’ll definitely happen during the Olympics, which are disproportionally more important to China — serving as a nationalistic spectacle that rallies the populace — than most countries. Let’s not forget, either, that this is a country that reveres its sports heroes, especially those who emerge as world-beaters. It’s difficult to tear down pedestals once they’ve been built.

Instead of even considering the possibility that we, as spectators, have been duped into believing in athletic greatness, many here seem to have decided to argue on completely different grounds. It’s a knee-jerk response that has, unfortunately, continued on past the knee-jerk phase. Here’s a sampling of comments on Sina Weibo from today:

@风小尧yumi: How brain-dead are you? You must be the ones on drugs. You must all be using banned substances, so you see someone else win and you suspect the same. Unbearable.

@Nani_天亮说晚安: I’ll say this directly: if you’re jealous of a our girl beating your male swimmer, then move from Great Britain (over to China), stop talking nonsense from home.

We’re conditioned to believe the Olympics aren’t political, but that’s a bald-faced lie, isn’t it? The Olympics are intertwined with politics, and the case of Ye Shiwen is a perfect example.

If you are interested in talking about the sports side of this issue, we can do that. The best piece I’ve encountered yet is from Ross Tucker, PhD, on The Science of Sport, as excerpted in the Guardian:

The only way to interpret that is to recognise that the physiology of a fast finish tells us that she must have a significant reserve for that final leg. It says that her first 300m was an extremely conservative effort. The simple question is: “Under what circumstances does a female have the capacity to finish a race as fast as a male?”

To answer this, think back to the key concept — finishing ability is a function of how close we are to our potential. To finish as fast as Shiwen does, relative to an unfatigued, isolated 100m freestyle, implies that she has a lot more potential in the event than was realised with her world record. The fact that Shiwen could close as fast as Lochte suggests to me that her efforts over the first 300m of that final took very little out of her.

If that is true, then her overall performance is a significant underperformance. The allocation of energy over the course of the race might be debated, but what physiology suggests is that it should probably be more even for Shiwen, and it would allow her to swim quite a lot faster than the 4:28.43 that she did.

But few seem interested in this. China’s sports officials certainly aren’t doing themselves any favors with responses like this one from Xu Qi, “team leader” of the swim team, as quoted by Xinhua:

Ye Shiwen’s swim result was expected. It is a little bit better than we had hoped, but not surprising…

To compare Ye’s result with [men's 400m IM winner Ryan] Lochte’s is meaningless. Ye was behind after 300m and she need to try her best to win the race, but Lochte had already established the lead before the freestyle and didn’t need to do his utmost.

These are all meaningless quotes, failing to engage on the relevant terms.

Then we have other swim officials who seem unwilling to cop to China’s past transgressions in the Olympics, namely the fact that dozens of Chinese swimmers were banned for using illegal substances in the 1990s. “We never questioned Michael Phelps when he bagged eight gold medals in Beijing,” Jiang Zhixue, anti-doping chief of China’s General Administration of Sport, told Xinhua. He then noted Chinese athletes have undergone nearly 100 drug tests since arrival without a single positive case, yet… yet…

That’s a Xinhua newsflash from this June 9, which Jiang was more than happy to not bring up. Shouldn’t swim officials, with this much dirt on their record, express a bit more willingness to actually talk about the issue, instead of clamming up behind a million faceless, vociferous Internet supporters? If they have nothing to hide, they should proactively try to win this public relations battle for the sake of Ye Shiwen, who by all accounts seems like a fantastic swimmer, one of the best in the world. Trying to turn the argument on its head by saying, “Well, look at these other countries” won’t cut it with the international press.

It will, however, appease — or inflame, which could be as good — those back home, where the conversation is running on a parallel track. Nowhere on Weibo did I encounter anyone discussing the science of split times in these medley races, or critically thinking about how Ye can be so good at the freestyle yet not be entered in any individual freestyle events, or even mention the name “John Leonard,” the American coach who first accused Ye of doping. Instead, we get:

@beerao: Westerners are people too. Everyone is able to be jealous. Please excuse their ignorance.

Yeah, Ye Shiwen is officially too big to fail — too important to this country’s “feelings” to have cheated. That she’s a world-class swimmer — with or without drugs, mind you — is becoming ancillary to a fact more pertinent to Chinese netizens at large: she’s China’s world-class swimmer.

Thankfully, other athletes haven’t taken the bait on this narrative. “No swimmers accused Ye, who is 5 feet 8 inches and weighs 141 pounds, of using illicit substances to fuel her kick,” reports the NY Times. And thankfully, not all netizens are clueless. @瘦身部落 points out, matter-of-factly, “Stimulant testing is the best response.”

Right? And testing is what will happen, because samples are kept for eight years, which is plenty of time for science to catch up to whatever is today’s illegal substance du jour. Until the shelf life of these samples runs out — or until a definitive answer emerges — all this chatter is pointless speculation.

And politics, of course. Although, in my opinion, that’s even more pointless.

2 Responses to “The Politicization Of 16-Year-Old Ye Shiwen”