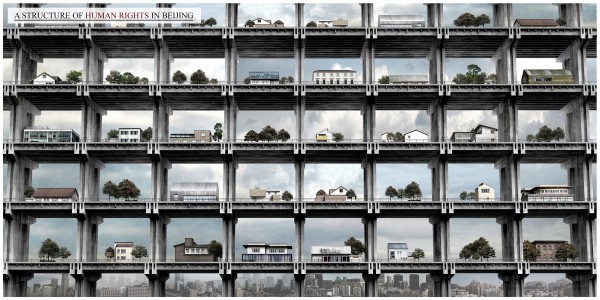 A Structure of Human Rights in Beijing, 2012 Skyscraper Competition Honorable Mention, via eVolo

The Olympics begin this week. Bet you forgot, huh? Be reminded over links.

New Chinese dictionary leaves out alternate definition of “comrade” as meaning “gay”: “The newly revised sixth edition of the Contemporary Chinese Dictionary has 69,000 entries, 13,000 Chinese characters and more than 3,000 new phrases. // They include internet slang such as ‘geili’ – meaning awesome – and such non-Chinese expressions as PM2.5, which refers to a pollution indicator for particulate matter. // But ‘tongzhi’ – in colloquial Chinese the equivalent of ‘gay’ as in ‘homosexual’ – is not among them. // Linguist Jiang Lansheng, one of the compilers of the dictionary, said in a Chinese television interview: ‘We knew about the usage but we can’t include it.’ // ‘You can use the word whichever way you like, but we won’t put it into a standard dictionary because we don’t want to promote these things. We don’t want to draw attention to these things.’” [BBC]

Stories that are uplifting: happy Apple customers pick up their pre-ordered iPad 2 3s. “First in line to purchase the new iPad in Beijing on Friday was Ye Huafei, a 34-year-old software engineer who arrived at the store just two hours before opening. Forced to purchase this new iPad after his iPad2 had been poached by his mother to watch TV dramas, Ye elected to arrive early to pick up his new iPad so he could bring it to work and show it off to his colleagues. // ‘It feels great to be first,’ said Ye. ‘The scene here is fantastic.’ // Apple’s new product releases tend to attract a younger, status-conscious crowd in China. But mixed in the opening throng of customers was Mr. Wu, an older customer who coyly put his age at ‘under 65.’ // Wu owns an iPhone 4S, but decided to upgrade to an iPad because he is getting older and his eyes have been getting tired looking at the small screen.” [Behind the Wall, MSNBC]

About that third Chinese veto of a UN Security Council resolution on Syria: “Britain said it was ‘appalled,’ and ambassador Mark Lyall Grant singled out Moscow and Beijing for having ‘chosen to put their national interests ahead of the lives of millions of Syrians.’ // Curiously, you won’t find many at China’s Ministry of Foreign Affairs who disagree with that assessment. Indeed, China has its own interests at heart…. China’s actions on Syria must be understood as part of a growing sense in Beijing that its world view is under assault from the West. // …So how far will China’s support for Assad extend? China doesn’t go for underdogs, so expect a parting of ways as Assad reaches his seemingly inevitable end, much as China did in the case of Libya.” [Evan Osnos, New Yorker]

A 19-year-old Chinese American girl was in Aurora for Batman’s opening night, but not in the same theater where the shooting occurred. She wrote down her thoughts on guokr.com, as translated by China Hush: “There are a lot of gun crimes in the United States.  There are no requirements for buying guns.  Just have to be over 18.  Everyone says the United States a safe place, I also said the same.  I came to America for 10 years already, I lived in Colorado for 10 years.  I am 19,  it is first time in my life encountering this kind of thing. I often go there to watch movies, we also lived around that theater with my family.  Therefore I was never scared before.  So naïve, thought it never would happened to me.  Now, it happened, I am scared.  I cried, because I knew how important my live is now.” [China Hush]

A bit late to this piece, but it’s great. “Apparently, to [Carmelo Anthony], Jeremy Lin is not in the fraternity. Or at least, Lin’s place in it is dubious enough that he has not earned the omerta that every other player gets. Anybody wanna try to convince me it has zero to do with Lin being Asian-American? Because, and let’s cut to the quick, Carmelo Anthony never ever would’ve made that remark about a black NBA player’s contract, and I doubt that he ever would’ve said it about a white player’s, either… // Could it be that Dolan thought the nice, quiet, devout Christian Taiwanese kid would be too cowed by The Great Man to play hardball over money? Could it be that he thought he owned Lin, had made him, and became furious when Lin refused to behave like it? Could it be that he expected Lin to be more – ethnic stereotype alert – submissive?” [Devin Gordon, GQ]

Today in dumb proposed US bills: “Congress is considering a bill that would revoke the visas of nearly all the 800 or so Chinese journalists in the U.S…. // But some American journalists have voiced concerns that the proposed law would cast doubt on America’s commitment to freedom of the press and risk sparking a visa war with China, which could result in the expulsion of Americans working for commercial media in China and impair American press coverage of China.” [Law and Border]

In which the artist was not actually at the hearing: “Ai Weiwei, the Chinese artist who has emerged as one of the government’s most nettlesome and high-profile critics, has lost his appeal of a $2.4 million tax evasion case that was widely seen as an effort to derail his antigovernment activism.” [NY Times]

Chinese students in America. “This writer has spent the summer this year rooming with a Chinese student in Beijing , whom I’ll call Abby. She complained about the same issues the Elisabeth Gareis survey noted. She finds American personalities to be very abrasive, blunt and outspoken: // ‘At some point America disappoints me. My friends and I say that American girls have queen personality. They act like a queen. Very self-confident and say whatever they want.’” [Danwei]

Michael Phelps would be wise to keep quiet, because it’s likely Ronda Rousey could beat him up. “Rousey said while at a party for all American Olympians, the athletes happily mingled together. NBA players hung with the rest of the group, but Phelps had his own area that was just for his group. // ‘These NBA players are a bigger deal than this guy, and they’re hanging out with us. We’re teammates. We’re not a bunch of groupies. Come hang out with us,’ Rousey said.” [Fourth-Place Medal, Yahoo]

“Panic at the Top”: a South China Morning Post editorial about the 18th Communist Party congress, via a site that’s not SCMP because SCMP uses a paywall. [Central Tibet Administration] 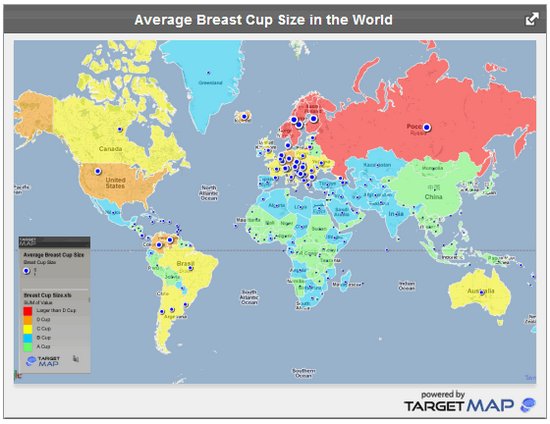 In case you can’t see the legend in the bottom left corner, China is an A cup. [yarkko, Target Map]