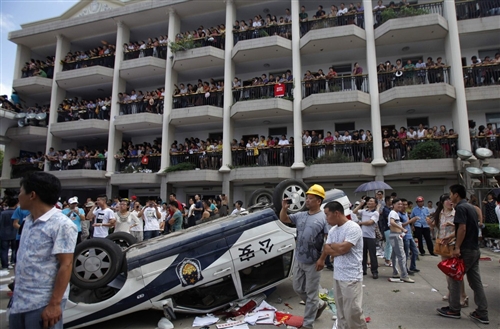 Protest in Qidong, Jiangsu, via Ministry of Tofu

Again, we’ll have an Olympics post after this one. Here are your regularly scheduled links.

Unlike those Shifang protests, news of this one has been blocked on Weibo. “Thousands of protesters marched through the coastal city of Qidong, roughly one hour north of Shanghai by car, shouting slogans against the planned pipeline that would empty waste from a paper factory in a nearby town into the sea. // Demonstrators rejected the government’s stand that waste from the factory would not pollute the coastal waters. // ‘The government says the waste will not pollute the sea, but if that’s true, then why don’t they dump it into Yangtze River?’ said Lu Shuai, a 25-year-old protester who works in logistics.” [NBC News]

Except the anti-Japanese sentiment. That’s on Weibo just fine. “Officials who oversee Qidong, a coastal city that faces Shanghai across the Yangtze River in China’s Jiangsu province, said Saturday they would ‘permanently halt’ a pipeline construction project intended to pipe water away from a paper mill owned by Japan’s Oji Paper Co. Local officials will now consider other ways to clean or transport the water that will come from the mill, which Oji Paper said is worth $1.95 billion. // But tensions surrounding the incident lingered on Monday. In Japan, the Asahi Shimbun, a Japanese newspaper, reported that more than a dozen local police on Saturday pushed to the ground and beat one of its reporters, Shanghai-based Atsushi Okudera.” [WSJ]

Murong Xuecun’s plea for a “gentler China.” “Modern China is a strange new world. Every day, tragic and unbelievable things happen, leaving us not knowing whether to laugh or cry… These incidents are mostly due to one reason, and that is almighty, unruly, unchecked government power. // …The first kind of [social malady] is a ‘numb personality.’ In a totalitarian society, people have already had most of their rights and privileges taken away from them, and any rights remaining are seen as a gracious gift from the rulers. Because of the simple fact of entropy, this state of affairs has become the new normal… // The second kind of personality can be called ‘difficulty in accepting reality.’ A long period of ignorance and brainwashing must by necessity lower the ability to learn of the society as a whole and impair critical thinking… // The third type of personality is called the ‘slave’ personality. Like Lu Xun described, China has only had two [alternating] eras: Temporary stable periods during which people are slaves, and periods when people want to be slaves but can’t… // The fourth type of personally is ‘minefield personality.’ For many people, living in China does not make them feel safe. It is as if they are walking in a dangerous minefield. Here, the law is just a fiction, and state power can derail at any time…” [Murong Xuecun, translated by Tea Leaf Nation]

Hong Kongers protest… again. “The latest manifestation of concern over ‘sinification’ is the Hong Kong government’s plan to introduce ‘national education’ into local schools at the behest of Beijing. The new subject aims to teach students about China’s history and culture, as well as to strengthen their national identity and help them ‘foster a sense of affection for the country,’ according to the Education Bureau’s curriculum guide. It will be taught in some elementary schools beginning this September and is to be mandatory in 2015 for all public elementary schools and 2016 for public high schools. // Several tens of thousands of parents, teachers, students and children took to the streets on Sunday, July 29, to protest national education.” [Time]

Corollary: Hong Kongers express themselves on video and on the Internet. [BadCanto] 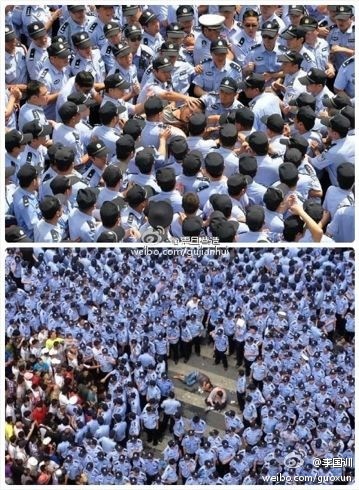