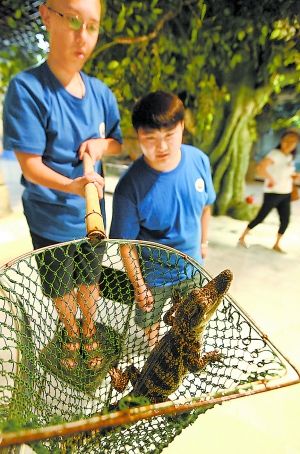 A Beijing property management staffer recently found a baby crocodile in a pool of water inside a residential complex, according to Xinhua. He called in the Beijing Aquatic Wildlife Center, which has confirmed the animal is a 40-centimeter young Siamese crocodile, native to southeast Asia, capable of growing to three meters. Apparently it had been raised as a pet and abandoned — shitty pet owners, I’m looking at you — and its new home will be the Beijing Aquatic Wildlife Center.

Officials from there have issued a statement saying these sort of aquatic animals found outside their habitat shouldn’t be set loose in the water: “Please promptly contact the animal protection unit to avoid unnecessary death or injury to the animal” if you find one. Lord forbid those urban legends about crocodiles (and alligators) living in the sewage prove to be true.