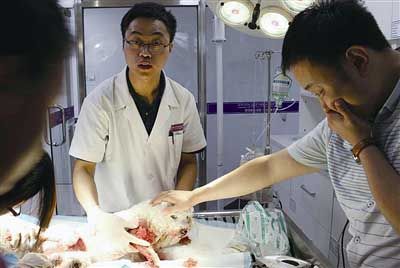 On Tuesday night, a man in Beijing’s Xiandai SOHO in Chaoyang District threw his Bichon Frise out of an 18th-story window, according to Legal Mirror (yes, the same that published this). If that’s the case, we have no idea how the dog survived, but it did after its fall was broken by the windshield of a Honda (picture after jump). Residents wrapped the bleeding pup in a T-shirt and took it to the hospital, where it was treated and its condition stabilized.*

As for the owner, he’s been arrested for endangering public safety, because they had to arrest him for something. China technically has an animal cruelty law, but I’ve never heard of anyone getting prosecuted for breaking it. I don’t want to judge the owner, because who knows what stresses were crushing his spirit and what devilish things the little dog did, but throwing an animal out of a high building is a shitty, shitty thing to do. Let’s all agree on that.

What is it with dog owners in Beijing lately, by the way? You’ll remember that yesterday evening, this happened — a dog stranded on top of a fourth-story air conditioner in Sanlitun. Animal owners here are usually highly doting and loving toward their pets, so we’ll chalk these two up as exceptions. It might need to be said, though: don’t own a pet if you’re too shitty to handle one.

Here’s what the car looked like after the puppy fell on it: 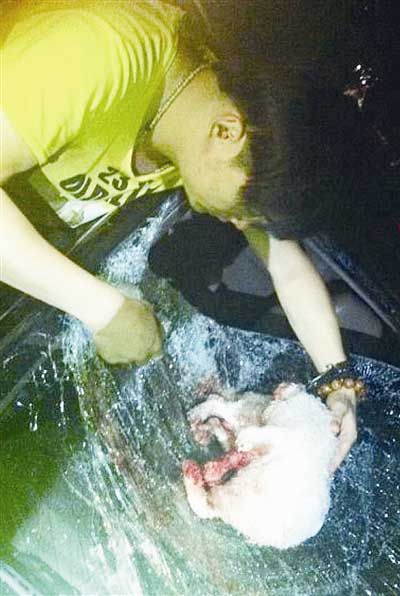 * UPDATE, 12:37 pm: The pup suffered multiple broken bones and internal bleeding, and is in fact not out of danger. One community resident has already proposed to adopt it, because needless to say, it’s not going back to its piece of shit owner, surnamed Wang, who was drunk when the incident happened, according to one newscast. According to the below newscast, Wang got mad when, while showering, the dog joined him and wouldn’t go out. On Weibo, the best comment so far: “Dogs will always be dogs; humans sometimes aren’t human.”