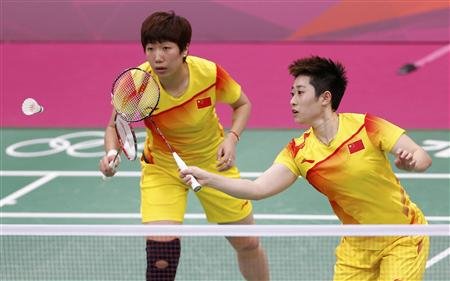 Let’s start with the format: the Olympic women’s doubles badminton tournament begins with pool play with four groups of four teams, with the top two teams in each group moving on to the quarterfinals. The matchups in the quarters are predetermined: teams from Groups A and C crossover (1st-place team from A plays 2nd-place team from C, and vice versa), while Group B and D teams crossover.

It’s a standard format, but one that inevitably leads to athletes trying to buck the system by throwing their final pool-play match to ensure a better draw in the knockout rounds. I imagine the international badminton community is fairly small, with everyone knowing the relative strengths and weaknesses of everyone else. Which would explain why the No. 1 ranked team in the world, the Chinese pair of Wang Xiaoli and Yu Yang, decided to throw their match in straight sets yesterday to South Koreans Jung Kyung-eun and Kim Ha-na — who, it must be said, were also trying to lose, but doing a worser job of it. It made for an awful spectacle for the fans at Wembley — the longest rally was a mere four shots — who booed loudly once they figured out what was happening.

Wang and Yu’s reward? They are now on the opposite side of the bracket as fellow countrywomen Tian Qing and Zhao Yunlei, who shockingly finished second in Group D. Assuming the favored teams win in the quarters, Wang and Yu will face Denmark’s Kamilla Rytter Juhl and Christinna Pedersen in the semifinals, the only team not from East Asia in the final eight. Wang and Yu, by the way, are the reigning world champions, beating in the finals of last year’s tournament — you guessed it — Tian and Zhao.

But how wise is this strategy? After all, there’s a reason Rytter Juhl and Pedersen were top of their group: they beat Tian and Zhao, in straight sets too, 22-20 21-12. Rutter Juhl and Pedersen are relative unknowns, possibly because they aren’t, as mentioned earlier, based in East Asia, but probably more so because they both focus on mixed doubles, where they excel. Could they possibly continue their dream run by upsetting the world’s No. 1 in the semis?

It would only be fitting. But what if the Badminton World Federation (BWF) steps in and doesn’t allow that matchup to happen? The BWF is currently investigating the Wang-Yu vs. Jung-Kim match, as well as a related incident involving Indonesia’s Greysia Polii and Meiliana Jauhari and South Korea’s Ha Jung-eun and Kim Min Jung. In that match, the stakes were relatively higher: the winner had to face Wang-Yu in the quarters. Once again, the Koreans were worse at being worse, and Ha-Kim now face a sure exit in the next round.

“The pairs have been charged … with ‘not using one’s best efforts to win a match’ and ‘conducting oneself in a manner that is clearly abusive or detrimental to the sport’,” the federation said in a statement.

Unfortunately, we’re not really sure what that means. What would the penalty be? Would BWF be bold enough to swap the semifinal matchups so that the Chinese teams are paired against one another? It seems doubtful.

“This is nothing. It was just a game,” said Li with a chuckle as he walked off, declining to comment further.

Just a game, huh? The chuckle and walk-off sure makes him look like a pro wrestling heel manager, doesn’t it?

This was only the start of the mudslinging:

“It’s because of those Chinese,” a Taiwan team coach who declined to be identified told Reuters.

“They did so many times last year, they did not play between each other like 20 matches. They do what they want,” he said.

“England finished top of the group and had to play a stronger team.”

China’s head coach Li told one of his women’s singles players to throw her semi-final at the 2004 Athens Games to allow team mate Zhang Ning to be fresher for the final against Dutchwoman Mia Audina.

“If it was the case they wanted to purposely lose, then it’s a big shame … it’s absolutely stupid and shameful sport,” Zwieber added.

“I can understand the motives but that they have the guts to actually stand in a crowded hall and put such shame in the game, it’s such a bad image for badminton.”

Yu Yang, for her part, defended herself thusly: “Actually these opponents were really strong. This is the first time we’ve played them and tomorrow it’s the knockout rounds so we’ve already qualified and we wanted to have more energy for the knockout rounds.”

And if you’re wondering whether this is actually a big deal, let’s just say that Chinese state media reported today that the Chinese Olympic Committee has opened its own investigation into the matter, then published a 624-word article summarizing the situation. Alas, we’re sure nothing will come of it, but the authorities here want you to know that they care that other people care. Because this is badminton we’re talking about. And badminton is not — as Coach Li will have you believe — “just a game.” It’s life, man.

UPDATE, 9:22 pm: All four teams have been disqualified from the tournament.