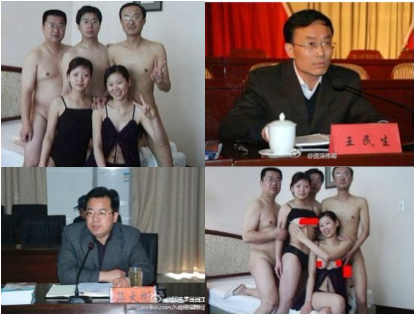 Mix is celebrating its 10th anniversary tonight and tomorrow with hip-hop concerts, apparently. So, you know, if you want to go to Mix, perhaps this is the weekend for that. Otherwise, non-Olympics links for now, Olympics links forthcoming.

We start with a Gu Kailai story: “The endgame in the Bo Xilai case may have finally been reached, after full blame was attached by a Hefei court to Bo’s wife, Gu Kailai– now revealed to have a secret attachment of her own. // A well-connected source – said to be Gu’s balls – admitted that Gu’s malevolent meatstick was directly connected to British businessman Neil Heywood’s death. // Sweating closely from beneath what is believed to be a full-sized she-dick, Madam Gu’s testicles told judges that their owner was definitely a ‘malignant bitch’ – or words, our legal source said, that were essentially similar to almost being the same.” [China Daily Show]

And all the others: [China Digital Times]

A story about Chinese art that doesn’t blame its shortcomings on censorship. “In their soft power offerings, America, Britain, France, Germany, etc. hope you realize you are part of the same human experience they have, and that you find their cultural norms and forms the best tools to explore that experience. The art that the Chinese state has chosen to put forward to represent itself sends a very different message. Instead of asking you to find the shared humanity you have with China and then explore that humanity through Chinese tools, the art put forward by the Chinese state asks you simply to marvel at Chinese tools. (To be fair, they do hope you find yourself having something in common with China – a love of China.)” [Tyler Cohen, Rectified.name]

Oh, so it was a bad idea to send her to labor camp, eh? “A woman who had been sent to a labor camp in central China’s Hunan province after petitioning for justice for her daughter, who was raped and forced into prostitution at age 11, was released Friday morning, according to local authorities.” [Want China Times]

Liberals in China, this is what Global Times’s main editor, Hu Xijin, thinks of you: “I’d like to say a few words to the liberals. You have stirred up China, and you have manufactured its adaptability. You have helped China progress by bringing change from the bottom up, and you have become one of the key forces in China’s reform. At the same time though, you are magnifying China’s risk, and you may one day bring China past that threshold of what it’s able to endure, thereby becoming the cancer cells that will lead to the demise of China. You have become a key tool in the hands of the Americans who want to topple China. I honestly hope you will eventually become a positive force in the destiny of China.” [Shanghaiist]

Don’t sell your kidney for Apple products. Pretty simple. “Five people have gone on trial in China for illegal organ trading and intentional injury after a student sold his kidney to buy an iPad and iPhone. // The defendants include the surgeon who removed the kidney from the 17-year-old in the central province of Hunan.” [BBC]

Posting as a fellow cat owner… “I was massaging the back of his ears as the vet injected him with the anesthesia, which put him down in about 30 seconds. Yes, it was agonizing, but it was a relief to put him out of his pain. He’ll be buried in my back yard, right alongside his long-time companion Daisy. May they both rest in peace forever.” [Peking Duck]

Interview with longtime Beijinger (and founding editor of the Beijinger) Jerry Chan. [Pangbianr]

“Justin Lee, son of Yuanta Financial Holdings director Li Yueh-tsang, has been charged with drugging and raping 15 women who worked in nightclubs or as models.” [Want China Times]

That article by Mark Kitto on why he’s leaving China is no longer behind a paywall. [Prospect] 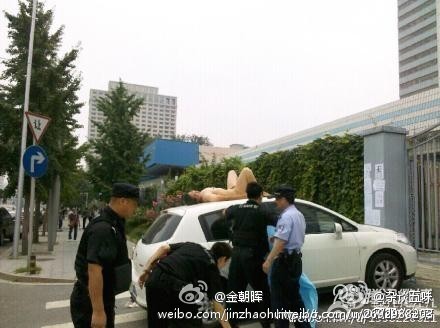 Just a naked woman on a car.