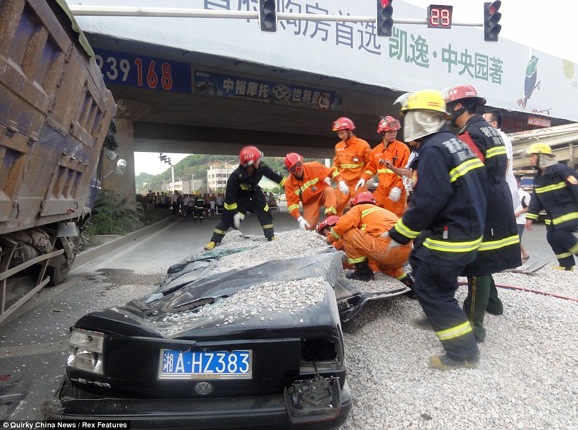 What if I told you there’s a man underneath that car, flattened by the truck, and that he survived? [Daily Mail]

We hope you didn’t spend Chinese Valentine’s Day yesterday wallowing in loneliness and self-pity. Let’s face it though, you probably deserved it… because you didn’t read enough links.

Our opinion remains the same as when it first happened: the Liu Xiang episode was very strange indeed. “At 1747 on 7 August, countless Chinese people collectively cried out in anguish when Liu Xiang fell on the first hurdle of his Olympic race. Yet the CCTV commentator Yang Jian did not sound at all surprised; in fact, as some Chinese web users have speculated, Yang sounded as if he anticipated that Liu would fall. As if confirming what many people were already suspecting, revelations from a CCTV Olympic report discussion forum yesterday confirmed that CCTV knew before the race the grave extent of Liu Xiang’s injury. // According to the story that leaked out from the CCTV discussion board, Yang Jian prepared a contingency version of the commentary should Liu Xiang somehow succeed in the race, but the version he expected to use – and did use – was to describe how Liu Xiang crashed out – hence him not sounding very surprised when it happened.” [Danwei]

In which Ai Weiwei is compared to Andy Warhol. “So what is it about Ai? What makes him, in Western eyes, the world’s ‘most powerful artist’? The answer lies in the West itself. Now obsessed with China, the West would surely invent Ai if he didn’t already exist. China may after all become the most powerful nation in the world. It must therefore have an artist of comparable consequence to hold up a mirror both to China’s failings and its potential.” [Smithsonian]

Water splashing gone awry. “The Water Splashing Festival of some of China’s ethnic minorities is meant to be a Carnival-like celebration where everyone gets splashed, sprayed or soaked with water, but the one held in a county traditionally inhabited by Miao people in Hainan province on August 23 ended abruptly on an ugly note: not long after the start of the festival was announced at 8:30 a.m., a dozen women were pinned down by a crowd of males, who mauled the women’s breasts and stripped off clothes of a few in broad daylight. // Finally the local police intervened and escorted the female victims away, although the wicked smile on one officer’s face is pretty self-explanatory.” [Ministry of Tofu]

“Involuntary commitment” seems like an anachronism, but apparently isn’t. “The abuse of involuntary commitment to psychiatric hospitals is a hot topic in China, with cases like Mr. Chen’s gaining widespread media attention. A Hong Kong-based human rights group, the Chinese Human Rights Defenders, in a report this week called on the government to ensure that a long-awaited Mental Health Law — under discussion for over quarter of a century — comply with international norms and protect the rights of both the mentally ill and the non-mentally ill from the power of the state, but also from the power of the family to incarcerate involuntarily, under conditions that are murky at best.” [Rendezvous, NYT]

True story: “AIDS without HIV” was a newspaper headline here last year. “Researchers have identified a mysterious new disease that has left scores of people in Asia and some in the United States with AIDS-like symptoms even though they are not infected with HIV. // The patients’ immune systems become damaged, leaving them unable to fend off germs as healthy people do. What triggers this isn’t known, but the disease does not seem to be contagious.” [AP]

Biking with Nietzsche: “However, what is anticipated is not always what is experienced, and when cycling perhaps more than any other mode of travel we are made aware of that Nietzschean concept of the ‘Eternal Recurrence.’ For Nietzsche, as with many Buddhists who graced the halls of Yonghegong, what is minimized is the importance of ‘ends’ and ‘purposes,’ and what is maximized are ‘states of being,’ because everything is eternally repeated and there is no end or purpose. Or, as R.J. Hollingdale explained in the introduction to his 1961 translation of Thus Spoke Zarathustra, ‘It is as if one were on an unending sea journey. The destination is immaterial, since it is never reached; but whether one is sea-sick for much of the time is very material: it is really all that maters.’ And while I never arrived at Yanqi Lake, I would like to think that I managed to develop a deeper appreciation for the ‘Eternal Recurrence.’” [Michael Caster]

Unfortunate generalizations, but otherwise…: “Romance in China is often sacrificed to practicality; dating has largely become a commercial transaction. In Beijing parents gather in parks to introduce their children to one another. Singles’ clubs set people up according to requirements — height, income, property. And tens of thousands descend on matchmaking events in cities like Shanghai looking for the perfect mate. // For Chinese men today, being the perfect mate means having a car, an apartment, a good salary and, preferably, a tall stature. Women, meanwhile, must be married by 27; after that they are branded sheng nu or ‘leftover women.’” [Clarissa Sebag-Montefiore, Latitude]

I guess this is the definition of “mixed reviews.” “Bloomberg Businessweek speaks with Peter Navarro, a business professor at the University of California, Irvine, about his new documentary Death By China. The film, based on the eponymous book he co-authored with Greg Autry in 2011, opened in Los Angeles on Aug. 17 and comes to New York on Aug. 24. Reviews have described it as ‘a lucid wake-up call‘ and criticized it for being ‘heavy handed‘ and containing ‘xenophobic hysteria.‘ Navarro reponds, ‘The film accurately depicts the devastation China’s unfair trade practices are having on Americans. Critics giving bad reviews should get out into the heartland of America more. Viewers are deeply moved by the film if our L.A. opening is any indicator.’” [Bloomberg]

Heartbreaking reality. “A 3-year-old girl named Jiayu was found abandoned at Xi Menkou Station in Guangzhou on the afternoon of August 21… // In her trolley, police found several items of her clothes, some food and a piece of paper which said: We (the parents) have tried years to cure her and we don’t have any money to support her anymore. We hope she can meet good people (that can take care of her).” [The Nanfang]

Suicide. “An independent commentator post on his Weibo said the editor of People’s Daily Supplemental magazine committed suicide after a longtime depression. Xu Huaiqian, 44, killed himself jumping off from his building on August 22.” [Free More News] 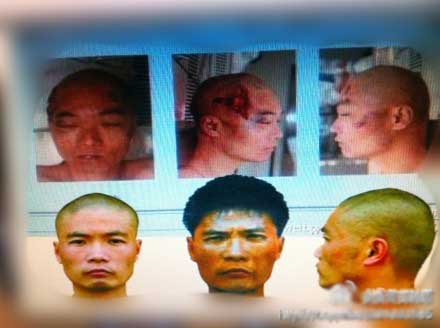