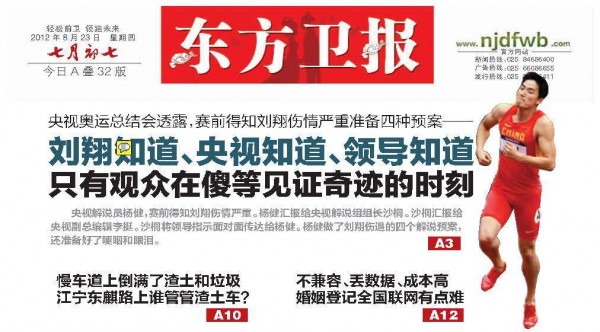 In the history of censorship in Chinese media, surely we’ve seen more half-baked decisions and upsetting punishments. But surely, as well, we’ve never seen so many journalists punished for such small beer. Spare me your sermon about Liu Xiang as the face of the country’s athletics program and a national hero, etc.: I’m arguing against the mechanisms that have underpinned this very apotheosis of a talented — but not heroic — athlete. The man is a hurdler. He should be relevant like every other hurdler in the world, which is once every four years, maybe two. No disrespect to any hurdlers, of course — I’m merely saying that China’s mythologizing of athletes is remarkably short-sighted and harebrained, as if athletes couldn’t fail. More to the point, it’s as if someone decided sports is the one arena where powers that be are free to whisk national pride with no fear of political reproach. Yet — and here comes the recoil — there are real-world, very political consequences, aren’t there?

Behold, as reported by South China Morning Post (from behind their stupid paywall):

Five editors with the Nanjing-based Oriental Guardian have been suspended over the paper’s critical coverage last week of the Liu Xiang injury cover-up, a rights group and local media sources said.

Editor-in-chief Chen Chaohui, deputy editor Yu Jiechen and three other editors were temporarily removed from their posts, but their final punishment is still unclear, the Hong Kong-based Information Centre of Human Rights and Democracy said yesterday.

Oriental Guardian, of course, was the paper that dared to publicize the silliness around Liu Xiang’s stumble at the London Olympics, including — as we noted, aghast — a state commentator dripping with tears and slobbering with sentimental bullshit. On Oriental Guardian’s August 23 front page, the headline blared, “Liu Xiang knew, CCTV knew and leaders knew – only spectators waited foolishly to witness the moment of miracle.” It was a direct challenge of state media, which is always dangerous, but we’re talking about CCTV’s sports department. Surely no one could be so thin-skinned as to take offense? To the extent that Liu Xiang’s bow-out received the over-coverage it did, the fault lies squarely with CCTV for its endless hyping of this hurdler, for running his annoying commercials every hour, for deciding, in a conference room, that a mortal could be Hero, even in failure.

Here’s what Liu had to say about the incident amid accusations that he was hiding injury:

“When I lost my balance at the first hurdle, I felt my foot was whipped by someone and then I fell,” he recalled. “I didn’t know what was going on and just felt a lot of pain. I was sitting on the ground in pain and felt totally blank.”

“When a stadium worker pushed out a wheelchair, I saw it and didn’t want to sit in it,” he added. “So I hopped to the finish line. When I passed the final hurdle, this thought just popped up in my mind and I wanted to kiss that hurdle.”

As if we didn’t see it all. As if the question was, “How much pain did you feel?” as opposed to, “Why didn’t anyone help you from the track, as if they expected your encore hop? Why did you attempt to race if your condition was so bad that you had to undergo surgery immediately afterwards? Who told you to race, and did you feel like you couldn’t? Why didn’t you warm up before the race? What do you think of a CCTV commentator crying? Who gave you those acting lessons?” And while we’re at it, how do you feel — as someone put it so eloquently on NetEase — about co-starring with CCTV in a world-class farce?

I understand iconoclasts in media are frowned upon here, but who knew a hurdler was an icon. There he is, behold. The mighty hurdler who, in eight years, hasn’t cleared one Olympic hurdle. Let us worship him and say, He transcends sports. How great that is!

One Response to “In China, It Can Be Dangerous Writing Even About A Fucking Hurdler”

Leave a Reply to Jables