While we all await Ye Shiwen’s next race — she’s the top qualifier (and Olympic record-holder) in the 200-meter individual medley, which begins at 8:43 pm London time / 3:43 am Beijing time — you might be interested to know that women’s gymnastics is on right now. Other Olympics stuff happened too, as you’ll see if you read on.

Ye Shiwen has passed her drug test: “The International Olympic Committee has sprung to the defense of China’s teenage swim sensation Ye Shiwen, saying she passed a drug test after her world record win in the 400 medley. // IOC spokesman Mark Adams urged people to ‘get real’ and said it is ‘very sad’ if great performances cannot be applauded.” [Globe and Mail]

World Anti-Doping Agency clears her as well, and she also has the support of Lord Colin Moynihan, head of the British Olympic Association. [BBC]

Chinese delegation hits back: “But others have argued that young athletes can make remarkable breakthroughs and have pointed to the way the Chinese system picks individuals for their physique and drills them rigorously. // Jiang [Zhixue, who leads anti-doping work at China's General Administration of Sport] said China’s swimming team had made breakthroughs due to scientific training and sheer hard work. // He added: ‘The Chinese athletes, including the swimmers, have undergone nearly 100 drug tests since they arrived here. // ‘Many were also tested by the international federations and the British anti-doping agency. I can tell you that so far there was not a single positive case.’ // The deputy anti-doping chief Zhao Jian said Leonard ‘thinks too much’ and urged people to wait for test results.” [The Guardian]

And one more, via The Diplomat:

Swimming writer John Lohn admitted that while China has a record of doping, that was in the past.

He criticized the doubters.

“What a bloody shame,” he wrote. “For some of the sport’s avid followers, it was enough to sit back and appreciate what will go down as one of the finest performances in the pool in years.”

Lohn noted that while China has a record of doping, that was a different time. “Its track record opens itself up — to a degree — to a level of doubt…. Still, the accusations fired at Ye are out of line in this age of drug testing. … Instead of dirtying her achievement with unfounded claims and doubts, it would be wiser to appreciate a performance which was legendary.”

And now for your non-Ye news…

A “child” with a lot more dignity than this paper: “A Chinese newspaper apologized on Tuesday for attacking one of the country’s young Olympic weightlifters for her performance at the London Games. // Zhou Jun failed to lift the starting weight in the 53-kg category on Saturday, prompting The Metropolis Times in the south-west city of Kunming to label it ‘the most shameful defeat for Chinese female weightlifters.’ // The paper, scorned by readers and commentators, issued an apology and said it lost sight of the Olympic spirit and was aware Zhou, 17, was ‘only a child.’” [Reuters]

Reuters: “Chinese swimmer Lu Ying, fresh from winning a silver medal in the women’s 100 metre butterfly, spoke out after the race against the Chinese training system, in a rare display of criticism from one of the country’s athletes.”

If you guessed Global Times would be the first to use the “Rising Sun” pun in relation to Sun Yang, you were correct. “Rising Sun stands tall with Chinese sport icons.” [Global Times]

No one understands why London is advertising Chinese milk, apparently: 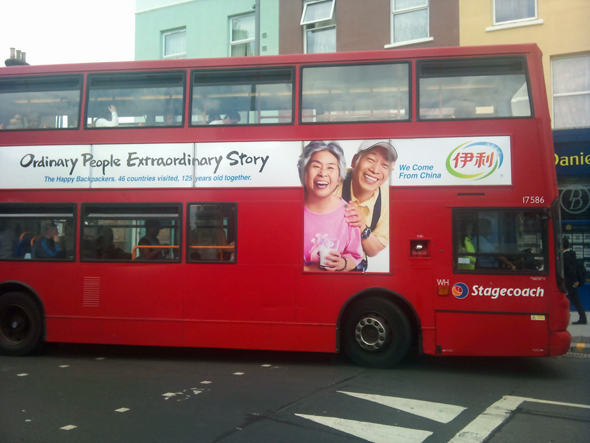 Yili, a Chinese milk company based in Inner Mongolia, recently launched an ad campaign on London’s iconic double-decker buses that had locals scratching their heads. The ad shows Chinese men and women, none of whom are recognizable celebrities or athletes, alongside the brand’s logo, in Chinese. No Yili products are for sale in London, and few clues on the buses hint as to the significance of these people.

With the help of Chinese translators, however, a handful of London bloggers were able to decipher the ad. Yili’s campaign is a coordinated effort with Youku, the Chinese YouTube, intended to promote the “Olympic spirit” of average Chinese citizens who lead active, healthy lifestyles.

US and North Korea are playing each other in women’s soccer, marking the first time Old Trafford has hosted women’s soccer in its 102-year-old history. [NY Times]