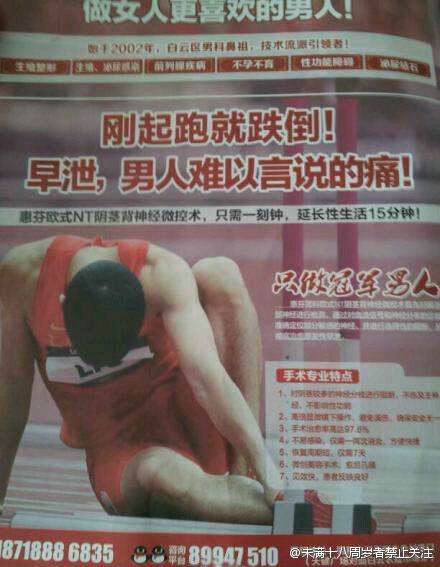 Poor Liu Xiang. In 2004, he was the poster boy for China and Asian athletes. Now he is the unwitting symbol of premature ejaculation.

As Ministry of Tofu noted on Tuesday, a newspaper ad has found another way to poke fun at Liu’s dismal performance (I mean his fakery and everything that transpired after he crashed out, not the injury itself) at the London Olympics. The ad reads:

He fell right after the start! PE, a pain that men are too embarrassed to talk about!

Huifen European-style NT penile dorsal nerves minimally invasive surgery. Within only a quarter of an hour, your sex life can be prolonged 15 minutes.

On Sina Weibo, one of these posts (there are more than one) has received nearly 1,200 comments and more than 11,000 forwards to date. If you want to discover all the “laughing” emoticons available on Weibo — open-mouthed, giggling, etc. — click on that link.

And then, in the comments section, you have the True Believer who gets all huffy and is like, “Lowly merchant. Can’t even afford a spokesperson. Only score points on table-scraping shots. And you want to help patients. Who would dare? No ethics, no baseline, degenerate hospital. Liu Xiang and you have half a mao’s worth of relations.” Yes, @呆大秋. Meanwhile, in the world the rest of us occupy, where a man is only as sacrosanct as the number of hurdles he’s able to clear, and the number of 15-minute sex blocks he’s able to complete: