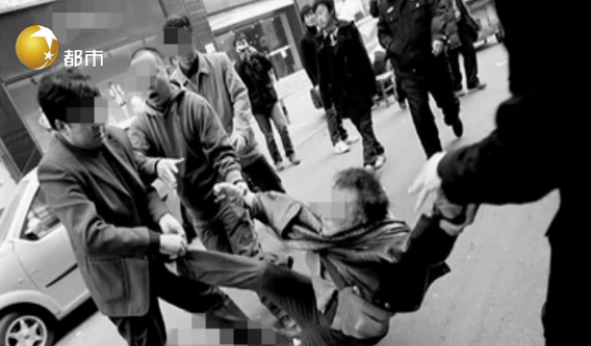 You want to know why people are sometimes reluctant to help strangers? Take this incident from Monday in Shenzhen, as reported by Hebei News. It’s a sad reflection on society when even a lost toddler can pose a hazard to one’s health.

A 33-year-old man surnamed Chai was with some friends on a public plaza just opposite Shenzhen’s city hall when he went off looking for a bathroom. Unexpectedly, he encountered a young child, three or four years old, who grabbed him by the hand and said he couldn’t find his family. Chai — still needing to relieve himself — walked with the child around the plaza, searching for his parents and relatives.

The reunion was swift and unexpected. Chai had not managed to say one word when the child’s family members sent fists flying, thinking Chai was kidnapping their child. Shoot first, ask later, right? Judging by the picture above, it looks like they were so convinced of Chai’s guilt that they would have happily ripped out his limbs.

A colleague sent Chai to the local hospital, where he got stitches on his nose and his lower lip. He even had a tooth knocked out.

Police, of course, have investigated, and confirmed — rather easily, one assumes — that Chai was not a child trafficker. He’s in fact a quality control manager for a restaurant chain and was in town for work. The family who beat him up absolved him of blame, but still refused to pay his hospital bills. According to Hebei News, the cops suggested to Chai that he file a lawsuit. Chai, for his part, hasn’t decided whether to do this, but he has filed a report with his company and is awaiting advice.

We’ll point out that the child’s family isn’t completely mad, seeing how up to 70,000 children are reportedly kidnapped each year in China, a mind-boggling number even if it’s wrong by a few degrees. Although: busted nose, lip and loose teeth — to do that to someone else, you have to be really convinced of his intentions. The family has some anger-management issues they may need to iron out.

And the best way to prevent child abduction remains not letting your young child wander alone in a public square. Beating up a guy just trying to help is counterproductive. Next time a toddler loses his way, how many potential Good Samaritans, knowing this story, will now look the other way?