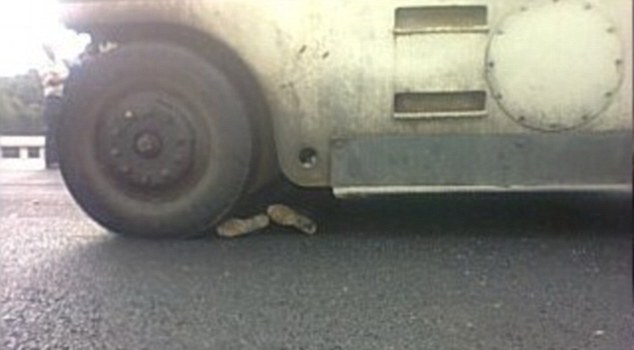 On September 16, a man protesting demolition-relocation in Lianhua City in Changsha, Hunan province was crushed to death under a steamroller, possibly by order of the deputy mayor, as reported by KDNet on Sunday. The incident was posted onto Sina Weibo on Monday, where it has since been forwarded more than 16,000 times, eliciting comments such as, “Why should we love country?” (@manhengjie) and, “Spectacle too horrible to endure” (@娴情依旧4448).

A villager named He Zhihua was upset about being forced to relocate to make room for a road project, so on September 16, he confronted Lianhua City vice mayor Ling Yun at a construction site. Ling slapped him, escalating a volatile situation. According to witnesses, He laid himself in front of a steamroller and shouted, “You got any skill, you’ll run me over!”

“If this expressway is to be finished, a few people need to die. Killing you will yield monetary compensation.” And just like that, the steamroller drove over He, “splattering his brains,” as the KDNet write-up describes it. Those watching nearby apparently said, “Too merciless.”

The next day, another clash broke out between contractors and residents, resulting in 20 villagers getting injured, five of them seriously. Their camera phones were confiscated. Furthermore, He’s 13-year-old daughter, He Ao, tried to commit suicide by jumping into the river, but was fortunately rescued.

Still according to KDNet, a local resident named Wang Jiyong said that the government sent 400 to 500 public security officers to steal He’s corpse and handcuff those who would do something about it. He Zhihua’s family had not even properly prepared his body for the funeral — which, obviously, will now not happen.

(The website Infowars reports — source unknown — that “the government sent in 200 men to keep angry locals at bay and hide the remains of the body. The man’s family was offered a sum of money in order to keep quiet about the incident.”) One more graphic image here, featuring what appears to be He Zhihua’s brains on the road.

3 Responses to “Protester Crushed To Death By Steamroller, Possibly On Order Of Town’s Vice Mayor”