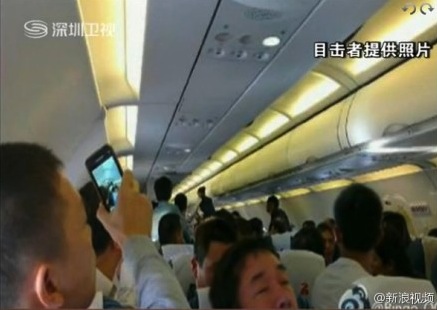 The Chinese man who tried to open an emergency exit door mid-flight, thinking it was a bathroom, now has company in the Hall of Notorious Fliers.

On a flight from Shenzhen to Xi’an on Friday morning, a first-time air traveler decided he wanted some fresh air, so he demanded the person next to him open the window. As reported by Shenzhen Satellite TV (embedded after the jump), the obstreperous passenger spat in the other’s face and cursed loudly. A stewardess then intervened. Since the plane was in the air, we can only imagine the stewardess politely told him to calm the fuck down. He did not do this. In fact, he did the very opposite, by throwing fruit juice on her and then pounding the window with his hand until it bled. All for just a breath of fresh air.

More than two hours later, after the plane landed, the man was turned over to police.