Huangpu Renewable Resources CEO Chen Guangbiao held an extraordinary promotional activity yesterday: he gave away 43 cars, each reportedly worth 128,000 yuan (that’s 5.5 million yuan total, or $830,000), to former owners of Japanese cars that got destroyed during last month’s Diaoyu Island protests. All people had to do to qualify for their free Geely — which is Chinese made, of course — was follow Chen on Sina Weibo, and the lucky winners were told to converge at Huangpu’s courtyard yesterday.

For you see, something extremely fishy was going on, as pointed out by the reporter in the above newscast (on Ku6 for those in China after the jump, doing real journalism!). His news team noticed some tall women in heels in the crowd, looking very much like models. When they tried to interview them, they were no-commented. There was also this:

The first man that’s interviewed says he’s from Jinan, Shandong, and used to drive a Honda. When asked if he’s gotten his new car, he says he arrived late and doesn’t know the procedure. Huh?

Another woman says, “I’m with him,” referring to who knows whom.

Another woman, asked, “What car did you used to drive,” looks away and replies, “No, I’m with them, can you stop grilling me?”

“You’re one household?” asks the reporter.

She turns away, exasperated. The camera pans to the man next to him.

“Yes,” the man says again, the worst liar in the world.

The reporter then points out that the entire setup has turned into a promotion for Chen, with banners that boast new products and developments.

“We can say this activity’s commercial aspect is very thick,” the reporter says to end the segment. 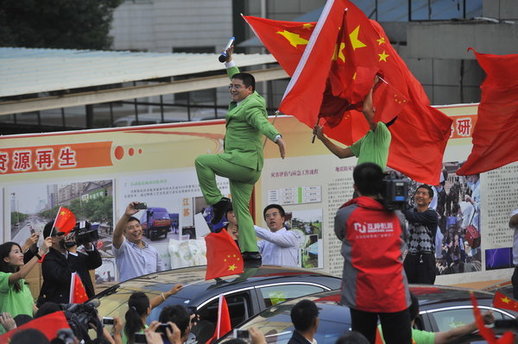 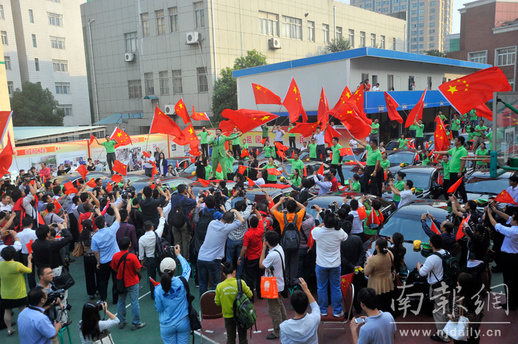 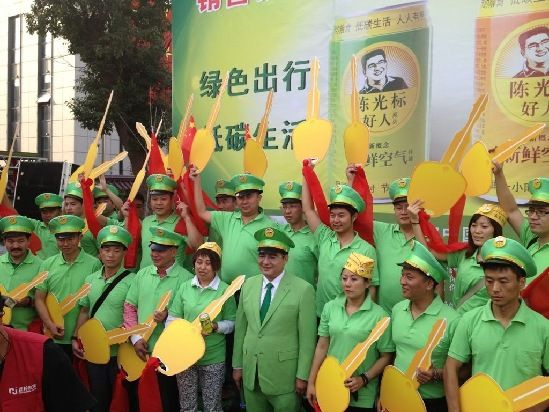 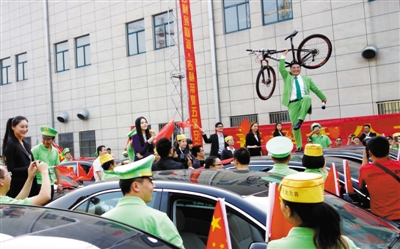 According to this Beijing News article, “Some netizens expressed their support, but more than a few netizens said this was ‘another example of a dude using a social event to create hype.’ Yesterday, some netizens said Chen Guangbiao was seizing the opportunity to show off.”

But maybe some lucky people did get cars after all. And those who didn’t look so happy may have had their own reasons for discontent. After all, who’d want to trade in a Honda for a fucking Geely?

Another video from the scene. The guy’s got some pipes:

4 Responses to “Chinese Entrepreneur Gives Free Geely Cars To Owners Of Japanese Vehicles Destroyed During Diaoyu Island Protests – Or Does He?”